In 2020, the Historic Grand Prix at Zandvoort proved to be the only international historic event that went on like nothing had happened, but a year later Covid forced it to run the event behind closed doors.  This year, Masters and the Historic Grand Prix Car Association were back and found themselves pleasantly surprised by a 25,000-strong attendance delivering a cool paddock vibe. Three days of bright sunshine helped as well.

In pre-Covid days, turnout for the event would have been regarded slightly disappointing, but as we adjust to a new world of Brexit and inflation,  while still having too many events to go around, the entry for the 2022 edition of Zandvoort’s Historic Grand Prix was encouraging. Masters’ Formula One entry was back to almost 20, while the HGPCA were over the moon.   The memory of a dismal six-car show at the Red Bull Ring was washed away by a stunning 39-car entry for their weekend in the Dutch dunes. A similar pattern emerged on the supporting grids – not quite back at pre-2020 levels yet but well up on some of the figures seen earlier in a season.  Apart from the fact that everyone loves the flowing, up-and-down nature of Zandvoort,  the drivers were buzzing from the atmosphere which they said gave them additional motivation. 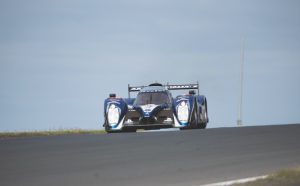 In the Masters Racing Legends F1 Race, despite the absence of Nick Padmore, teammates Marco Werner and Michael Lyons occupied the podium twice, Werner winning race 1 from pole and then doubling up on the next day by charging to the front from a reversed grid for Saturday’s top five. Halfway into the race, Lyons fought back while Werner was hampered by a misfire that vanished as mysteriously as it came.   The German then picked up his pace to take a second victory. Lyons in turn began to suffer from a vibration, leaving him defenceless against Lukas Halusa’s Williams FW08, as the Austrian produced a storming drive from the back after a troubled first two days.  Frank Stippler in the Thomas Steinke-owned Alfa Romeo 182 saw its fragile V12 give up seven laps into the race. 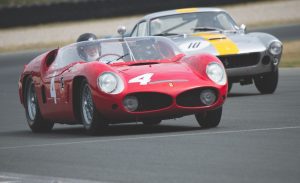 The first HGPCA race was won by Will Nuthall’s Cooper-Climax T53 from Michael Gans in the more recent Cooper-Climax T79.  Starting from fifth, the American tried hard to take the fight to Nuthall but gave up when he was baulked by traffic.  Technical issues prevented the two from taking part on Sunday, leaving Rüdi Friedrichs to win in his similar T53.  Local hero Michel Kuiper qualified a strong second to Nuthall. After a fluffed start in Race 1 he was only sixth, but on  Sunday he started guns blazing to chase home Friedrichs in his Brabham BT4 while holding off Andy Middlehurst in the Lotus 18.  Among the front-engine cars, John Spiers’ Maserati 250F led all the way on Saturday, running as high as seventh with several mid-engine cars acting as a buffer to Richard Wilson’s Ferrari 246 Dino, but towards the end Spiers dropped away to hang on for the class win by a mere four seconds.   On Sunday, it was the other way around, Wilson leading from the front while Spiers first had to fight his way past Rod Jolley’s Lister Monzanapolis that also finished third in class in race 1. 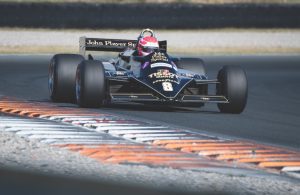 Marco Werner in his Lotus 87B won both the F1 races

The other main event of the meeting was the FIA Historic Formula 3 European Cup, returning to Zandvoort after a two-year absence.  From the 17-car grid, Davide Leone (March 783) won the first race from the front and by finishing second in race two was able to lift the Cup for pre-79 cars.  His main rival Frédéric Rouvier (in a similar 783) had to charge through from sixth on a grid after an engine issue in qualifying, and the young Italian did well to fend off the flying Frenchman who was subsequently disqualified for a failing restrictor.  Starting from the back on Sunday, Rouvier was up to fourth after the opening lap in what he described as “a Playstation lap”.  He was then helped by Dane Michael Ringstrøm (Martini MK42)  who outbraking himself into Tarzan ended up on top of the March 793 of hapless Frédéric Lajoux.  After the safety-car restart, Rouvier blasted past Leone to take the win.Meanwhile, David Thorburn crowned an eventful weekend by snatching the Cup for 1979-’84 cars,  despite his Ralt RT3 having been involved in a violent free-practice crash with Keith White’s RT1.  The two Maxx Formula races for recent F1, GP2 and Formula Renault 3.5 cars disappointed in numbers, with just five cars of the seven entered actually appearing.. 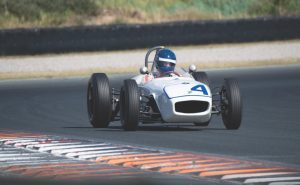 Arguably the most intense and most enduring duel of the meeting was provided by Tom Bradshaw and the Dutch father-and-son duo of David & Olivier Hart. Bradshaw’s Chevron B19 led away from pole in the one-hour Masters Sports Car Legends race but was kept in plain view by David Hart until he handed the Lola T70 Mk3B to son Olivier, leaving two very talented young men to show what the Chevron and the Lola are truly capable of.  Hart Jr slowly nibbled away at Bradshaw’s lead and after the two going along the main straight side-by-side for several laps he finally made it through.  Chris Jolly and Steve Farthing in a Cooper Monaco T61M won the pre-66 class fight with Richard McAlpine’s McLaren M1B. 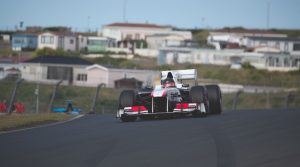 Julian Thomas and Calum Lockie were in a league of their own in the combined Masters Gentlemen Drivers & Pre-66 Touring Car race, their Shelby Cobra Daytona Coupé racing off to a lead of two minutes and 28 seconds at the chequered flag.  It wasn’t that the opposition was poor.  The local efforts from Tom Coronel and Zandvoort track owner Bernhard van Oranje in another Daytona Cobra and the Harts in their Bizzarrini 5300 GT were strong enough, even though the Bizza was delayed by a slow puncture.  Still, Lockie’s lead was impressive, and after the driver change to Thomas, the gentleman driver of the two,  now almost on a par with his tutor,  lapped faster than Coronel and Hart Jr on his way to a fine win. John Spiers and Nigel Greensall were in with a shout too until the latter had to retire their TVR Griffith from second place. 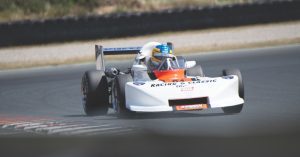 In the concurrent one-hour touring car race, Sam Tordoff ruled the roost from start to finish, his Falcon leading home the similar car of Julian Thomas and his preparer Andy Wolfe. Richard Dutton took a distant third to win the Cortina class.

Entering as a one-off, David and Olivier Hart each won a race in the Dutch GT & Touring Car Championship for 1966-’81 cars (NK GTTC), their Ferrari 512 BBLM proving more than a  match for the phalanx of Porsche 911 Carrera RSRs leading the regular contenders.  The two rounds of the Dutch Touring Car Championship for ‘82-’90 cars (NK HARC 82-90) easily went the way of Dane Steffen Lykke Gregersen, whose E30 M3 twice beat Ko Koppejan’s Mercedes 190 2.3-16. Closing the curtains on Sunday, the second race ended prematurely by a bizarre turn of events under yellow flags. One of the BMW E30 325i Group N drivers ran amok by starting to overtake every car ahead of him before running into the safety car. The race was red-flagged immediately. A bewildering end to a generally wonderful weekend.

For the full report, see our August Issue