This year saw the largest number of entrants for the Rallye Elba Storico ever recorded – to the point that many alterations to the programme were required, including a change in the location of the main parc fermé and re-grouping points and a change in the location of the finish.  One hundred and eighty-three crews ran concurrently in the eighth round of the 2022 FIA European Historic Rally Championship and the seventh of eight rounds of the Campionato Italiano Rally Auto Storiche, as well as the A112 Abarth Trophy and the Michelin Historic Rally Cup.  It was also the 34th edition of the Elba Graffiti Regularity rally, with an added category for “regularity sport”. 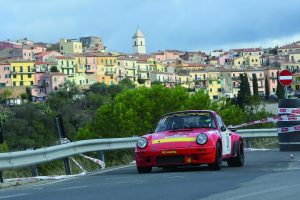 But it was the sporting rally that attracted the most competitors with 50 registered for the European Championship and 58 for the Italian Championship.  After reconnaissance on Thursday 22 September, and what has become the traditional 7.24km evening prologue, which runs through the streets of Elba’s main town of Capoliveri, Aci Livorno Sport devised two more full days of rallying on the Mediterranean Island, with four more stages on Friday and five on Saturday, with a return to Capoliveri each night. 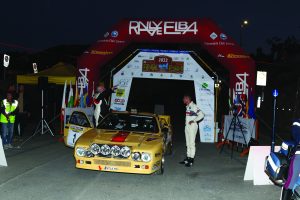 Ville Silvasti and Risto Pietilainen started the second day at the head of the FIA leaderboard in the 037 Lancia, but their tenure was brief when they succumbed to engine problems on SS7

Swede Mats Myrsell and his Finnish co-sdriver Esko Junttila, returned to the fray in their Ford Cosworth after a puncture on the the first day set them back to take overall victory in the FIA category.  The overall, and Italian Championship went to Angelo Lombardo and Roberto Consiglio by 55 seconds. 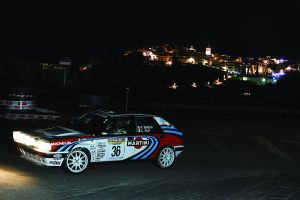 In the overall event, locals Francesco Bettini and Luca Acri came back after a two-year break and took the first two stages in their spectacular Martini-liveried Lancia Delta Integrale 16V only to raise the white flag after an off in the third stage

For a full report see out November issue…