After two years of displacement by the pandemic, the Tour Auto returned this year to its usual April date, from 24 to 30, for an unprecedented route that led 230 competitors (132 in competition and 98 in regularity) from Paris to Andorra via La Baule, Limoges, Bordeaux and Pau.  Among the entries in the Competition classes, two former F1 drivers were in the game, Thierry Boutsen aboard a Shelby Cobra prepared by the Belgian Gipimotor team with which he had done a full-scale test in Sixties’ Endurance at Mugello Classic, and Henri Pescarolo with Michel Périn, in a BMW 3.0 CSL with the support of his historic sponsor Motul and also BMW, also partners of the event.  Jean Marie Biadatti reports… 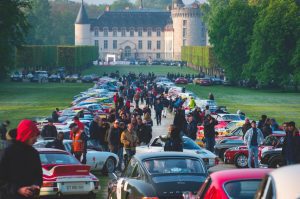 For the latter, the operation was not a success, Pescarolo noticing from the beginning at the Chateaux de Rambouillet that the car was not working properly.  From the first race event on the Bugatti circuit, the game was up.  The car did four laps of practice before returning to the pits and not leaving.  Needless to say, the crew was disappointed with this ill-prepared car.  But Pescarolo and Périn showed professionalism by accompanying their sponsors throughout the week, going to meet the many spectators and fans. 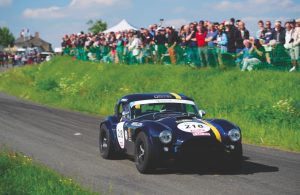 The winning Cobra – there were big crowds all along the route. Photos PhotoClassicRacing

Amongst the beau monde in VHC, in addition to the Cobra of Boutsen, there were two former triple winners of the event, Raphaël Favaro (2018, 2019 and 2020), who had come accompanied by a new co-driver, Thomas de Saulieu, driving the faithful Lotus Elan 26R of his debut, and Jean-Pierre Lajournade (2010, 2016, 2015) in his Jaguar E-type 3.8.  Also of note was the presence of Damien Kohler and Sylvie Laboisne in a Shelby Cobra, present on the podium for the last five years.  There were no fewer than 11 Jaguar E-types, six Shelby Cobras and six Lotus 26Rs, foreshadowing great battles on the French roads. 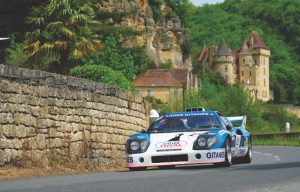 If Boutsen predictably won two of the three circuit races, with victories at Le Mans and on the Val de Vienne circuit, it was different on the road special stages where he made three mistakes, including one that almost spelled the end of his run, when he exited the road on the fourth stage in reverse, getting a lot of earth into the exhaust and preventing him from finishing the stage correctly. 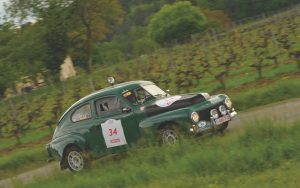 Boutsen was contrite.  “A bit of a debutante’s error, really!  I’m still finding my feet as it’s only my third rally.  Doing the Tour Auto with a Cobra is a real challenge as it’s a real monster to tame on the road.  In the stage we were taking a gentle right-hand corner and we were doing around 150-160 km/h.  I just clipped the verge where there was some grass.  The car immediately spun and went backwards into the grapevines.  My co-driver and I were afraid that we’d remain stuck on the spot given the time it took us to restart and rejoin.  We realised there was a problem with the exhaust, so I had to drive very carefully till the end of the stage.  The mechanics worked for 20 minutes to clean up and put things back into shape.” 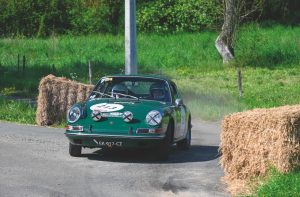 In plateau 5 for group HI, for the most recent cars, the fight was just as avid.  Mr John of B, co-driven this year by ‘Le Commandeur’, had renounced last year’s Matra MS650 to come up with another magnificent prototype, his Ligier JS2 with Cosworth engine, a car that finished second in the 1975 24 Hours of Le Mans in the hands of Jean-Louis Lafosse and Guy Chasseuil.  Seeing and hearing this car on the small roads of France will remain an exceptional memory.

It was another Belgian crew that won in Group G, with the Ferrari 365 GTB/4 of Jeremy Lancksweert and Christophe Van Riet, the Ferrari model honoured by Peter Auto for this edition.  This victory allowed Van Riet the record of having won in all the competition categories of the Tour Auto,  having won in VHC last year aboard the Shelby Cobra entrusted to Boutsen this year, and in the HI category in a Porsche 3.0L RSR in 2015.