Despite a four-hour hiatus while Terry Crabb’s damaged ERA R12C was extricated from the forested upper reaches of the course under police con-trol, two records fell when the Vintage Sports-Car Club resumed its annual hillclimb – round two of its Speed Championship, which opened at Curborough the previous weekend – at Wiscombe Park on Sunday, May 8.

First used over a shorter course in 1958 – coincidentally the year in which event commentators Marcus Pye and Peter Hughes were born – the 1000-yard section of the Chichester family stately home’s front drive, set in a sylvan South Devon valley, has hosted the VSCC for around 40 years. Per recent times it shared the weekend with the 500 Owners’ Association event on Saturday. 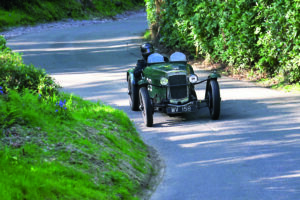 Crabb’s White Mouse Stable ERA – created by the late Bill Morris in 1982 from the chassis and remnants of Prince Bira’s 1938 Reims crashed R12B/C set aside during its contemporary rebuild for the Siamese Prince’s use post-war – left the track after Sawbench hairpin towards the end of the first practice runs, cut through rhododendrons and hit a tree.

Thrown clear, Terry sustained a broken leg.  Marshals and the rescue unit crew, stationed at Sawbench, reached him in seconds, closely followed by the event doctor.  Following surgery the next day, Crabb is now recover-ing.  The old ERA, which like so many old warhorses has been in the wars before, will be returned to concours condition in due course.

When action resumed with the final few mandatory practice runs, the large audience basked in warm sunshine on the grass adjacent to Bunny’s Leap on the undulating lower part of the course, or spectated from lofty vantage points above the bluebell-lined Castle Straight which precedes Martini, the final tight left handed turn preceding the finish.

Dr David Pryke was the first record-breaker in his 1936 Morgan/Riley 4/4.  Not only did he carve 0.98s from his 10-year-old Class 9 target, but his 48.85s run also beat last year’s BTD setter Greg Lerigo (Riley Special) into second place with a stout 50.09s.  In the 1101-1500cc Pre-War Racing Cars set, the intrepid Jon Giles finished a close runner-up to class winner Michael James (Riley 12/4 TT Sprite Rep), resetting the Vintage record to 48.47s in the 1924/28 JAP-powered Morgan GN Salome in which his late father, fearless Freddie, always excelled.

Ian Baxter set BTD, cutting 46.91s in his ex-Philip Jucker 1957 two-litre Alta 61 IS single-seater, chased by Julian Grimwade on 47.64s in his 3.5-litre Alvis-engined Frazer Nash.  An important new prize was the inaugural Richard Bonham Christie Trophy, presented by his widow to the best time by a competitor under 30.  From nine entrants, one tenth of the total, it was proudly won by class victor David Frank with a 52.93s ascent in the 1922/28 two-litre AC/GN Beetle previously owned by Jonathan Mellor who was competing in a Frazer Nash Boulogne TT.