The Vintage Sports-Car Club made its annual visit to Mallory Park in Leicestershire on Sunday 21 August for the last of four 2022 race meetings.  After morning practice, a grid walk-about was staged featuring the Edwardian class and much of the large crowd attended for a closeup view.  John Whiteman reports…

The circuit is set in a natural bowl with excellent viewing over virtually all its 1.35 miles, but it was a great pity that the two commentators could only be heard in the paddock and not by the large crowd of spectators.  Apparently, this is not an uncommon occurrence at Mallory. 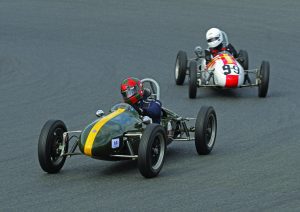 Following their grid display the Edwardians became the first race for The Dick Baddiley Trophy, run as a handicap over a nominal 8 laps. Winner on handicap was Rob Hubbard in a 1917 Vauxhall 30-98 from Ian Balmforth’s Hudson Super Six Racer of the same vintage, with the penalised, fast-starting 1911/16 K.R.I.T. of Neil Gough in third.

Three 15-minute Scratch races followed and the first, An Allcomers for Pre-War cars saw a good battle between pole-sitter Michael James (1937 Riley 12/4 Cotton Special) and Patrick Blakeney-Edwards in his 1930 Frazer Nash Super Sports, until the Riley spun and stalled at the hairpin and retired.  In the second, Sue Darbyshire’s Morgan Super Aero charged into the lead ahead of pole man Mark Brett, in his Ballamy-Ford Special.  The latter eventually emerged from a close battle to lead Max Sowerby’s 1939 Talbot Lago T23 and Adam Moody’s 1937 Riley TT Sprite over the line to claim second place.  The third race was another win for three-wheels with Sandford Andrews’ 1926 Morgan Aero 2 seater finishing comfortably ahead of Anthony Seber in his 1935 Wolseley Hornet Special. 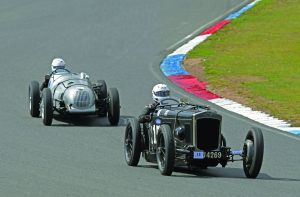 The headline race for the Bob Gerard & Robert Ashley Trophies over 20 minutes followed with Harry Painter’s Brabham BT16 on pole by less than a second from Justin Maeers’ Cooper-Climax T53.  But any hope of them renewing their Silverstone battle disappeared when the Brabham non-started.  However, all was not lost – after a couple of laps Jon Milicevic in a 1963 Foglietti 1100 was challenging for the lead from his third row start.  The nimble and rare little Italian car, powered in period as now by a Cosworth engine as opposed to the usual Fiat, was built by Ernesto Foglietti, himself a Fiat ‘concessionare’, which must have gone down well!

Arguably the race of the day was provided by Patrick Blakeney-Edwards and his 1930 Frazer Nash Super Sports, who won after a wonderful scrap with Tom Walker in his Amilcar Hispano Special, Oliver Llewellyn (Bentley 3/8 litre) and Justin Maeers’ GN Parker, before the latter retired with a couple of laps to go.  The lead was constantly changing and there was much side-by-side motoring, the fastest lap going to the Bentley in third.

The 500 Owners Association provided a good 14-car field for their 15 minutes with several unusual cars such as the Comet Mk1 of Duncan Rabagliati, Flash Special of Stuart Wright, the Waye of Jonathan Morris and Simon Frost’s CFS to name but four.

The whole meeting was very slickly run off with the last race actually starting 20 minutes early.