It’s been a while, but vintage racing was back, with the VSCC Formula Vintage race meeting at Mallory Park on 23 August.  And what a way to start.  Mallory Park is one of the UK’s most attractive venues, its twin lakes giving it a unique setting, think Interlagos transplanted to rural Leicestershire.  Chris McEvoy reports….

This was the first VSCC race meeting since the world went into lockdown and it was an interesting experience, with access to parts of the circuit heavily restricted, even for accredited media, with no entry to pits or paddock for chats to drivers or mechanics, or light repartee with marshals.

This being August and England, the weather was always going to be a bit variable.  Indeed the forecast was “Cloudy changing to thunder in the afternoon”.  True to form a brief but heavy shower added a little frisson to the early afternoon races, but soon dried and it remained settled for the rest of the event.

As ever with the VSCC there was a great range of cars.  A welcome returnee was Mark Walkers’ World land speed record 1905 Darracq 200hp, its first race since the engine gave up with an oily piston through its block on the same track way back in September 2016.  Its first outing proved a success with a finish in the John Holland Trophy race.  A 1957 Kurtis Indy-Roadster, various configurations of Austin 7, a smattering of Frazer Nash, a couple of Bugatti T35s, an ERA or two, plus plenty of MGs filled the grids.

The meeting definitely had a family theme.  Along with Mark Walker, other family members, son Hughie (Theophile Schneider and GN Thunderbug) and daughter India (Austin 7 Special) also took to the track.  The family thread continued as much on the track as well as in support roles to keep everything running smoothly.  The Cawley clan had a trio racing, with father Dougal (GN/Ford Piglet), son Wilf (Frazer Nash Emeryson) and grandad Andy (Frazer Nash Super Sports) participating in the Frazer Nash Challenge.  Father and son Dennis and David Johnson, with Frazer Nash Colmore and Super Sports respectively, also contested the FN/GN Challenge.  Other families shortening the odds of taking home a trophy were the Seber brothers Rodney and Tony, both in Wolseley Hornet Specials, father and sons Harry (MG PA) James (MG Kayne) and Mike Painter (MG PA) in two Allcomers races and the MG vs Austin 7 race.  Another VSCC racing dynasty taking to the grid consisted of various Blakeney-Edwards, who at the close of play scored the most victories, with three winners out of the nine events. 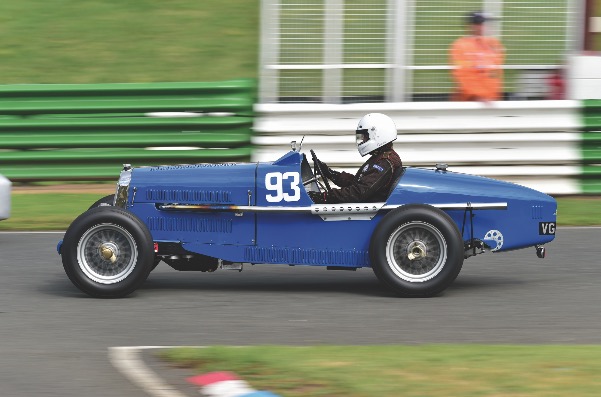 As befitting the nature of VSCC racing and its competitors, the racing was good, clean and honest.  The handicappers performed their tasks with the usual skill and in the last race the margin between the first three finishers was less than a quarter of a second.

For a full report of the racing see our October issue……