After the hype and excesses of the British Grand Prix two weeks earlier, Silverstone returned to its grass roots on Saturday 16 July when it hosted The Vintage Sports-Car Club’s Hawthorn Trophy meeting.  It was the first race meeting at the circuit to which the club could welcome spectators since 2019, and competitors and the public alike were greeted with a glorious sunny day, the downside of which was high temperatures causing overheating problems on some cars.  John Whiteman Reports…. 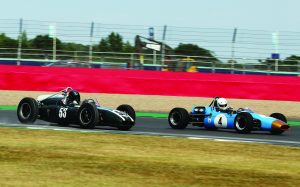 What was in most people’s eyes the main race of the day, 20 minutes for The Hawthorn Memorial, Patrick Lindsay Memorial and Hawthorn Spanish GP Trophies for Pre-War and Pre-1966 Racing Cars – a long winded title but it produced a varied 24-car field and a memorable fight for the lead between very disparate cars.  Pole went to Harry Painter, first time out in the 1965 Brabham BT16 fitted with a 1594cc engine, with a time of 64.81secs from Michael O’Brien (Brabham BT 6 Formula Junior), Justin Maeers (Cooper-Climax T53 2.5 litre) and Sam Wilson (Cooper T59 1100cc) all within the same second.  The race lost one of its interesting runners after practice when Duncan Ricketts’ ERA Parnell Challenger came into the pits leaking oil.  It was discovered that an oil line had snagged the trailer unloading and had vibrated loose.  When the cars formed up on the grid Julian Wilton was out of the car requesting a push start for ERA R7B, and Ben Maeers’ Cooper-Climax T51 was pushed off the grid, eventually starting from the pit lane.  A further green flag lap finally got the race under way, with Painter leading from O’Brien and Maeers Snr and Mark Gillies next up in another T53 Cooper.  By lap four Justin Maeers was up to second to set the stage for a battle royal over the next 15 laps with the T53 Cooper powering ahead on the straights only for the more nimble Brabham to close and nip ahead on the twisty bits,  O’Brien was always in close attendance in third with Mark Daniell (Cooper T45) progressing up to fourth.  The result was to some extent decided by back markers, but the power of Maeers’ Cooper told in the end with a narrow 1.15sec win over Harry Painter with Michael O’Brien almost snatching second only 0.09 behind on the line.