In modern day parlance Prescott would be The Vintage Sports-Car Clubs ‘halo’ meeting but suffice it to say, it is the club’s most anticipated event as much for its social side as for the hill climbing.  This year’s was held on 6-7 August in perfect conditions, both for climbing and picnicking in the Orchard.  John Whiteman sends this report.. 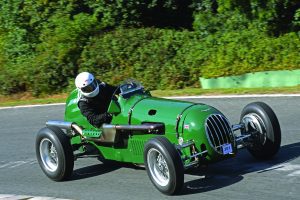 Practice as usual was on Saturday with the two timed runs the following day for the large entry of well over 200 cars spread over 16 classes catering for everything from Austin 7s, all celebrating their 100th anniversary, to four classes for pre-1941 Racing cars of varying capacity.  It was from these latter classes, of course, that the fastest runs came with FTD falling to Ian Baxter’s 1937 Alta 61 I.S. Single Seat with a time of 41.55 seconds, faster than Patrick Blakeney-Edwards (1930 Frazer Nash Super Sports) in a class record time of 42.86.  Next up was Ben Fidler (ERA R4D) in 43.26, with Nicholas Topliss only 1/100th sec behind in what must be the only road registered ERA (R4A).  The same class also saw an appearance from a ‘new’ ERA owned by Roland Duce and driven by David Ellison.  The well supported Edwardian class also saw two ‘new’ cars.  Neil Gough brought a 1911/16 Krit built in Detroit, and Pino Lombardi a 1912/15 Luxior built at Vincennes, Paris, both originally powered by modest 4-cylinder engines but now fitted with 8 litre Curtiss power.  The class was won by Jeremy Flann in another Curtiss aero engined special, the 1918 Le Zebre.  Fastest young driver was Ben Maeers driving the family 1926 GN Parker with a time of 43.96 secs. 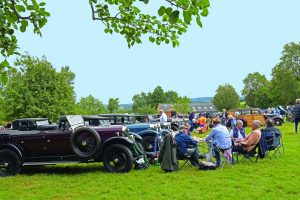 Prescott hill is owned by The Bugatti Owners Club and within the grounds stands The Bugatti Trust building, which is always worth a visit.  This was particularly true in August with a Summer Exhibition celebrating the life of Jean Bugatti, eldest son of Ettore, and his influence on Bugatti history, especially the Type 57 range.  Among many artefacts on show, including sectioned engines, wheels and tools, trophies and personal papers, was an example of arguably his masterpiece, the Atlantic bodied 57S.  The car on show, one of only four made, was bought originally by Jacques Holzschuch and has had a chequered life involving three major rebuilds, the last one to exacting standards by Paul Russell and Company in America.  Also in the exhibition were examples of work by other members of the Bugatti family, furniture by Ettore’s father, Carlo, and sculptures by his brother, Rembrandt. 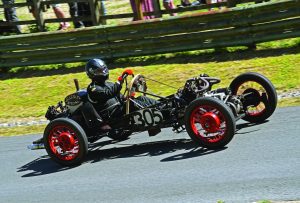