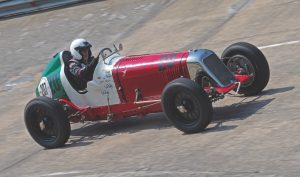 The Vintage Revival was first held at the historic Linas-Montlhéry circuit south of Paris in 1998 organised by the great French Anglophile Jacques Potherat in time to celebrate 75 years since the opening of the circuit.   Sadly, Jacques died in 2001 shortly after the fourth event.  By this time the venue was under threat of closure by owners UTAC, the French motor industries vehicle testing and type approval agency and the outlook for any more events looked bleak.  However, a change of heart by UTAC fortunately brought about the venue’s re-opening. and with the approval of Potherat’s widow, Jacqueline, the Vintage Revival was rekindled in 2011, now under the enthusiastic guidance of Vincent Chamon who had ‘caught the bug’ from Jacques while visiting VSCC Prescott in 1998.   It was wisely decided to hold the event every two years but with last year’s cancellation there was much anticipation for 2022. 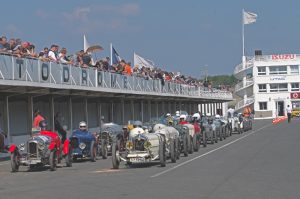 The event originally scheduled for 2021 to celebrate 100 years of the foundation of Amilcar attracted multitudes of the marque along with BNCs, a company founded in 1923

A weekend of good weather greeted spectators and some 500 participants spread over eight grids for cars and three motorcycle categories on 7-8  May.  The featured marques this year were Amilcar and BNC with vast numbers of the popular 1920’s French sporting cars entered in appropriate classes.  Many iconic Bugattis were there, of course, with Type 13, 23, 35, 37, 51 and a solitary Type 59.   One Bugatti that stood out was the replica Type 35 ‘Friderich’ coupe fitted with a Type 51 engine that was used in some 1930s competitions by Nice Bugatti agent Ernst Friderich, a car that changed hands at this year’s Retromobile auction.  Also attracting enormous interest was the re-emergence of the doomed and much maligned 1930’s French Grand Prix car, the SEFAC, which was partly funded by public subscription and designed by Emile Petit and Edmond Vareille both of Salmson fame.  The single car built featured a supercharged side-by-side ‘parallel eight’ engine of some 2600cc – later 2760cc – but sadly the confection was grossly overweight for the 750kg formula when it first appeared at Montlhéry for the 1935 French GP  and was not allowed to start.  With body alterations, as it appears now, and the enlarged engine, it did take the start of the 1938 French GP at Reims but ‘blew up’ after two or three laps.  After failing again at Pau in 1939 it was slated for Lyon in 1948 as the Dommartin, but again disappeared without trace.  The 2022 iteration, superbly built by Classic Job from Dalfsen in Holland to the 1938 spec, ran well on Saturday until its final lap which ended in a cloud of smoke and a non-appearance on Sunday.  Let’s hope it’s not history repeating itself. 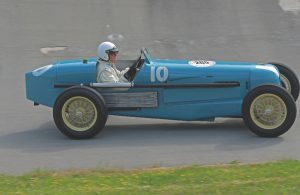 The mythical S.E.F.A.C grand prix car returned to the track at which it debuted in 1934 but still encountered engine problems