Victory for ‘Zippo’ and Piceno in the FIA Historic Vltava Rallye

Even with this year’s much tougher competition, Italian duo Andrea ‘Zippo’ Zivian and Denis Piceno managed to reassert themselves and repeat their victory of last year at the 30th Vltava Rallye, second round in the 2022 FIA Historic Rally Championship. 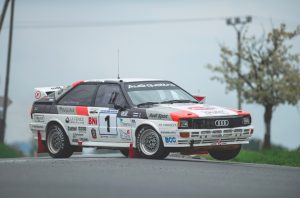 The 30th Historic Vltava Rallye, was also the 56th Rallye Sumava Klatovy for modern cars, with most of the anticipated names signed up for both events.  With 89 entries in the historic event, more than forty of them competing in the FIA European Historic Championship, there were crews from 18 countries across Europe.   ‘Zippo’ was back in his Audi Quattro, as was Austrian Karl Wagner (Porsche 911), who fought a fantastically even battle for victory on the last stage last year.  But while back then it was a battle of these two cars, this year there was a much wider field.  Amongst the challengers were winner of the first FIA round in Spain in March,  Swiss Pascal Perroud  (BMW M3); last year’s Category 2 winner local Czech driver, Vojtěch Štajf (Toyota Celica GT);  past champion in 2017, ‘18 and ’20, Tibor Érdi in a Ford Sierra RS Cosworth, and another Vltava regular Finn Ville Silvasti (Lancia Rally 037).   And anyone who thinks that historic rallying is only for “older gentlemen”,  this line-up shows otherwise. 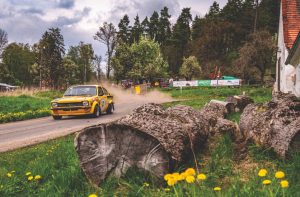 These drivers are all a generation younger than Norwegian Valter Jensen (BMW M3) and Swede Matts Myrsell (Ford Sierra RS Cosworth), who have a total of five Vltava victories between them in recent years.  The only regular front-runner missing from the list was ‘Lucky’ in his Lancia Delta Integrale, who dropped out for personal reasons before the start of the rally.  Already last year, the participants encountered many new or renewed special stages.  The organisers continued this trend this year. 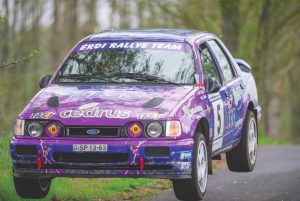 For the full story see our June 2022 issue, also available in digital form…..