The 29th edition of the Tour Auto Optic 2000 had to be postponed to September because of the pandemic and the continuing health situation led some competitors to withdraw at the last minute.  There were nevertheless 195 competitors still at the start, with 102 in regularity and 93 in the competition category, the latter including four previous winners.  Shaun Lynn and Ludovic Caron brought Shelby Cobras, Jean-Pierre Lajournade was in his winning Jaguar E-type, and the winner of the last two editions, Raphaël Favaro, who drove a Lotus Elan 26R in 2018 and 2019, was this year at the wheel of a Jaguar E-Type belonging to his co-driver, Lucien-Charles Nicolet, prepared by Equipe Europe.  Damien Kohler also abandoned his Lotus Elan for a 289 Shelby Cobra maintained by Gipimotor.  Porsche prototypes were in the spotlight for 2020 and there were three 906s in the VHC field, as well as a Porsche 904.

This year there was no start from a chateau but on the legendary Linas-Montlhéry circuit where the first special stage started on the road and ended on the speed ring, making an atypical special that saw Favaro dominate the debate.  We then witnessed a sumptuous battle on the Magny-Cours circuit in grid 4, which saw the victory of Mr John of B’s ​​Porsche 906.  Meanwhile Caron dropped right down in the results following contact with the Cobra of Frédéric Jousset, who was forced to retire.  There was also a beautiful battle in grid 3 between Sébastien Berchon (Austin Healey 100/4) and Stanislas Gurdjian (Morgan +4 Super Sport) that would continue at all circuits. 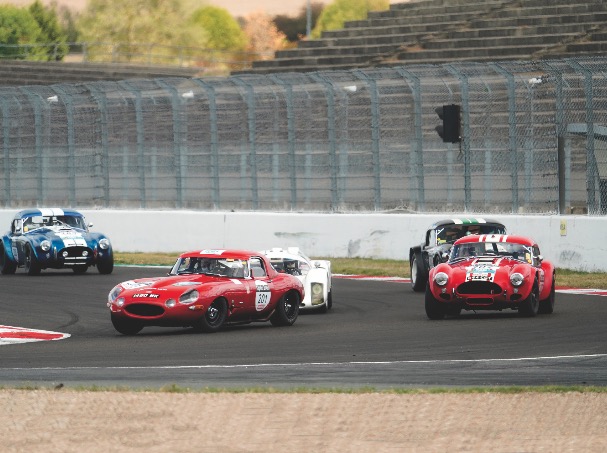 Chased variously by the Cobras of Shaun Lynn, Ludovic Caron and Damien Kohler, and the Porsche 906 of Mr John of B, Raphaël Favaro resisted them all to take his third Tour Auto victory, this time in an E-type Jaguar shared with Lucien-Charles Nicolet

The second leg started from Clermont-Ferrand and allowed competitors to have an early morning race on the grandiose circuit of Charade.   On the evening of this second leg, Mr John of B’s ​​Porsche 906 led the general classification ahead of Lynn by six short seconds, with Kohler and Lajournade further back.

The third leg, which took the rally from Limoges to Toulouse should have included a race on the Albi circuit, but the change of date for the event meant the circuit was no longer available.  Instead, there were three road special stages.  This was Favaro’s day, the Swiss getting to grips with his new mount and winning all three stages!

On day 4 competitors crisscrossed the roads of southern France, passing through the magnificent site of the Cirque de Navacelles.  Once again Favaro dominated special stages, while Mr John of B lost a little time in a minor exit from the road.  Kohler missed a turning which made him also lose precious seconds. 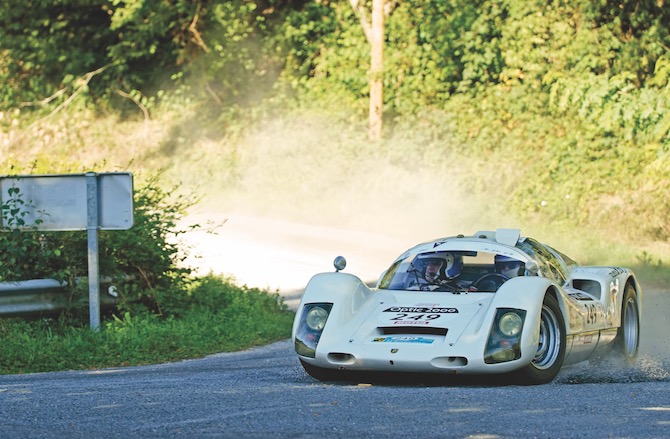 Less comfortable on the roads, Mr John of B lost time to the GT cars on the special, stages.  Photos PhotoClassicRacing.com

The last leg was shortened, with the finish taking place at the Paul Ricard circuit.  It remained only for Favaro to manage his lead, and he left the scratch win of the last special stage to Lajournade and the victory on the Castellet circuit to Kohler, who won it after a final twist of fate when the Porsche 906 of Mr John of B stopped with a seized gearbox.

The final victory therefore went to Raphaël Favaro and Lucien-Charles Nicolet ahead of Jean-Pierre Lajournade and Christophe Bouchet and the Cobra of a Damien and Sylvie Kohler for what was an edition filled with suspense and drama.

We should also note the excellent performance of Sébastien Berchon in his Austin Healey 100/4, a car from grid 3 that punched above its weight to finish in a fine fourth place. 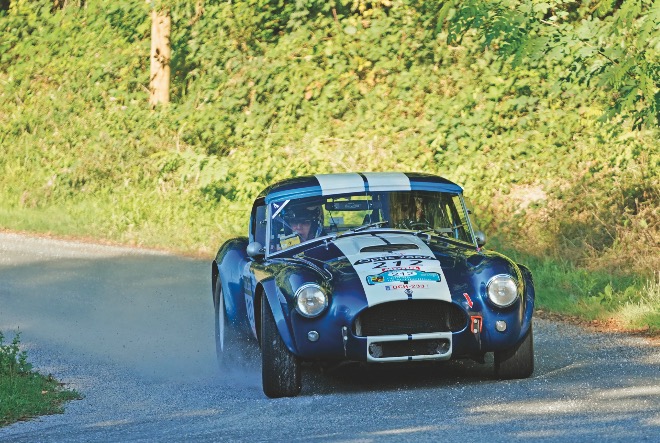 For us it was above all an edition to familiarise ourselves with the Cobra, which is much more powerful than what we have driven in the past,” explained Damien Kohler. “… nishing on the podium is a real satisfaction. Our direct opponents have been warned: next year, we are back to play for the win!”

A very important part of the Tour Auto is the index of performance result.  Here three lovely cars topped the podium, with Gilles and Marielle Couraudon winning in a Porsche 356 Pre-A 1500 ahead of Diego Meier and the romantically named Giacomo Amoroso in a Ferrari 225S Vignale Berlinetta and the Alfa Romeo Giulietta Sprint Veloce of Jean-Yves Beaupigny and Garard Dumesne.  In fifth place was arguably the most exotic car in the rally:  a Pichon Parat Dolomites in the hands of Hugo Baldy.  A good fight all week between the Ferrari 308 Gr4 Michelotto of the Jean brothers and the Porsche 911 3.0 RSR of Emmanuel Brigand in the G/H/I categories resulted in a win for the Italian car, which finally to a lead of 2m16secs over the Porsche.

The regularity section attracts more and more specialists and becomes more and more closely fought.  Regular Tour Auto competitors  Jean-François Nicoules with his son François won this year for the  fourth time at the wheel of a Ford Mustang, beating 2018 winner Jean Rigondet in Porsche 356 and Patrick Bonnardel, driving a Triumph TR4.

For a full report, see out October isse…….