Three out of Three for Collins at Skope Classic

50 Years after McRae and Hawthorne

A little over 50 years ago, in 1972, the late, great Graham McRae drove his then new Leda ‘GM1 001’ Formula 5000 single-seater to a dominant victory in the Lady Wigram Trophy race on a temporary circuit at Christchurch’s Wigram Air Force Base in New Zealand.  Fifty years later, on April 9, two of his cars – the original  STP pink Leda ‘GM1 001’ now owned by Alistair and Vicki Hey and driven by young local Michael Collins, and a later ‘production’ model ‘McRae GM1’ owned and driven by three-time former SAS Autoparts MSC NZ F5000 Tasman Cup Revival Series title holder, Steve Ross, qualified first and second, at the re-scheduled Skope Classic meeting at Collins’ home track in Christchurch.  After swapping the lead a couple of times amongst themselves, a mistake by Ross allowed Collins the final pass for the lead that he held to the flag.  Third across the line – having spent much of the race defending the position from fellow Lola T332 driver Codie Banks – was the ever-improving Kevin Ingram. 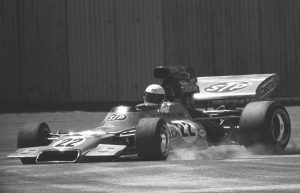 Graham McRae on his way to winning the Lady Wigram Trophy race in his Leda GM1 in January 1972 and Michael Collins in the same car winning the NZ F5000 Tasman Cup Revival Series at his home track in Christchurch and earning the Bert Hawthorne Memorial Trophy. Photo Fast Company/Terry Marshall 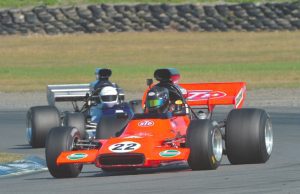 After a scintillating 1:18.868 pole lap – the only sub 1:19.00 lap set across the whole weekend – Collins trebled up the following day, winning the reverse-grid handicap in the morning, with Ross a mere 1.119 behind, and aced the afternoon 12-lap feature final, still with Collins on his heels. 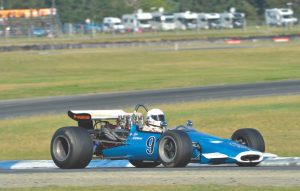 For more of the story see our May 2022 issue