Picturesque Vernasca lies deep in the Piacenza region of northern Italy where, between 1953 and 1972, it hosted a legendary hillclimb that ascended 290m from Castell’Arquato via Lugnano over an 8.5km course. Many a famous name drove here when it was part of the European Championship in the 1950s and 60s, but these days it is run as an untimed demonstration in a festival atmosphere. That doesn’t stop participants from laying down a lot of rubber nor plenty of overtaking, despite the 30 second interval releases. It is a chance to see some rarely seen specials in action and on 10-12 June, fans were delighted by such unusual sports prototype appearances as a 1966 Serenissima Jet, 1968 Abarth SE10 2000 or a 1969 Ferrari 212E/206s lightweight. The organisers say they choose entries based on relevance and rarity. So, it was a surprise to see a 1990 Peugeot 205 Rallye on the hill, nevertheless the random passing of a 1955 Iso Rivolta Isetta bubble car followed by a 1968 Lola T142 F5000 just made it all the more enjoyable. 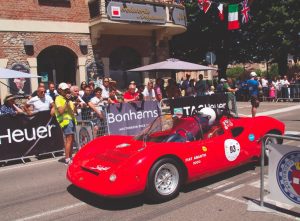