Having taken a cautious approach at the beginning of the season, with just three home rounds scheduled for the 2021-22 season, the SAS Autoparts MSC NZ Tasman Cup Revival Series saw all three of its proposed rounds cancelled due to the ongoing COVID restrictions prevailing in New Zealand.  A new schedule was hastily devised and two of the race meetings went off without further hitch, with competitors thrilled to be back out on track.  Last of the season’s meetings was at the Taupo Classic meeting at the Taupo International Motorsport Park on the weekend of May 14-15, which was sadly cut short due to diluvian rain that swamped the track and caused the whole second day of the meeting to be cancelled.  The heavy rain with a forecast for more prompted meeting and track officials to call a halt before racing got underway on Sunday morning, leaving categories like the NZ F5000 one with just one race – the 8-lap preliminary run on Saturday afternoon. 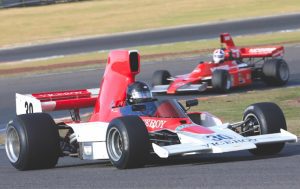 Just a day before, in cool and dry weather and track conditions on Saturday afternoon, the 8-lap opener was won by Feilding ace Kevin Ingram in his Lola T332.  The former New Zealand Formula Ford champion set a stunning pole lap of 1:26.550, then set the fastest race lap on the way to a dominant debut series’ victory over Grant Martin (Talon MR1/A) and Tony Galbraith (Lola T332).

Fellow front row starter Steve Ross (McRae GM1) helped himself to an early lead off the start, only to spin away his advantage as he exited the circuit’s first up-and-down, multi-corner complex.  With Ross having to wait for the whole of the 13-strong field to pass before he could get going again, Martin became the Talon meat in a high-speed Lola T332 sandwich with Galbraith matching his lap times just behind.  The ever-improving Glenn Richards (Lola T400), the only other driver apart from Ingram to dip below the 1:28 barrier in the race as he chased down Galbraith, ended up fourth, while Ross managed to work his way back up through the field to cross the finish line fifth.

Anticipating two more races on Sunday, the drivers and crews were extremely disappointed that their already short season was ended so abruptly.