June 18-19 saw one of the world’s largest vintage racing organisation return to Indianapolis Speedway after a two-year break. Featuring pre-war Indy cars, single seater classes and numerous sports and GT races there was plenty to attract interest. Champion racer Jimmy Vassar made a return to his roots and won both the Formula Ford events while Formula Vee was popular as ever. The other star attraction was Geoff Brabham, who did almost as well, winning the second of his races in a 1971 1600cc Brabham BT35. It was also the 47th annual convention of the Shelby American Automobile Club. 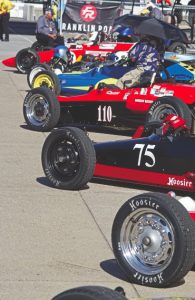