After COVID put paid last year to a new end-of-year meeting at Spa, (to be known as Spa Hat trick), organiser Roadbook scheduled its third Spa meeting, after the Spa Summer Classic and Spa Six Hours, for the weekend of 5-7 August this year, and named it SuperSpa, launched with the slogan ‘not all heroes wear capes, some wear helmets.’  While Spa is well-known for its erratic and anything but predictable weather conditions, drivers and the public enjoyed three days of uninterrupted sunshine.  Marcel Hundscheid Reports.. 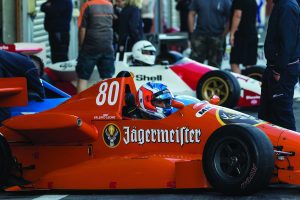 On Saturday the program consisted of qualifying sessions for the AvD Historic Cup from Germany, a series made up of Formula Ford 1600 and 2000 and Formula Ford Zetec single seaters, with Formula Opel cars and F3, and for the modern series ACNN, BMW Racing Club from the Netherlands and the FX Pro Series for F4 cars.  Back on the Roadbook programme was the Spa Ardennes Challenge, a continuation of the late, great Barry races for British and other GT, TC and “interesting” cars of the 60’s and ‘70s, that used to take place at the Six Hour meeting and latterly at the Spa Summer Classic.

Two 25-minute races were reserved for the historic AVD single seaters.  Stephane Lechine from France in a striking yellow Reynard F389 VW Spiess was the man to beat in both heats, although Valerio Leone from Monaco came very close in the first race, finishing just 0.5 of a second short.  Third place in the F3 category behind two Formula Opels, went to Marcus Hahne from Germany in a Dallara F390.  In the second race Leone came even closer until he started having problems with the injectors in his Dallara and eventually retired.  No other driver could keep pace with Lechine, who crossed the finish line 47 seconds ahead of Dirk Kornmeyer from Germany in a Ralt RT3/84.  His compatriot Elio Cocciarelli finished third in an Alfa Novamotor powered Ralt RT3/84.

Just ten cars found their way to the grid for the first race of the Spa Ardennes Challenge on Saturday.  Pantelis Christoforou from the UK drove straight into a commanding lead in his Ford Escort Mk2 RS2000, leaving Paul Neville to settle for second place in his similar Ford Escort.  Guillaume Peeters with rally veteran and local hero Jean-Pierre van de Wauwer, drove a Lotus 23B to the final spot on the podium.  The second race of the weekend actually became a copy of the first, as Christoforou scored his second win of the weekend followed home again by Neville and the Belgian duo.

As with the Spa Summer Classic, that took some time to get a following and is now highly popular, this meeting shows much potential as an annual event.