The annual Spa Summer Classic own the weekend of 24-26 June was a major event for fans of historic motorsport, perfectly organised by the Roadbook team led by Vincent Collard.  It wouldn’t be Spa-Francorchamps if the drivers weren’t treated to rain over the weekend and as expected, it was prominent on Friday and Sunday with heavy showers, while Saturday stayed dry.  Once again, it managed to attract a wide variety of historic racing cars. Big starting grids provided the necessary spectacle, culminating in the main three-hour race on Saturday evening. 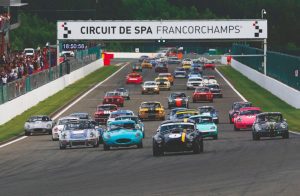 Sixty-nine pre-1976 historic sports and touring cars appeared in qualifying for the main event.  Local heroes Christophe van Riet and Frederic Bouvy drove the Gipimotor Cobra to pole position in a time of 2:51, just a quarter of a second faster than the Lotus Elan of 2019 winners Graham Wilson and David Pittard.  At one hour the Shelby had dropped to 14th courtesy of an early pitstop (one of two). leaving Lars Rolner and Pierre-Alain Thibaut’s Porsche 911 3.0 RS at the front. By two hours the van Riet car had climbed back into the lead and would stay there to take the chequered flag, after a clean run in which they outpaced Rhea Sautter and Andrew Newall in Sautter’s Jaguar E-type in second.  After a race thankfully free of major interruptions, the finish took place in the dusky twilight shortly before 10 pm.

Th e rest of the racing included an amalgam of different clubs and organisations sharing various grids on the long Arenas circuit.  The British CSCC held both ‘Classic’ and ‘Youngtimer’ races, with Nigel and Oliver Reuben (TVR Griffith) and Raymond Barrow (Chevrolet Camaro( sharing the spoils in two Classic races.  Over 50 Youngtimers, mainly from the UK were entered with great battles throughout the field. 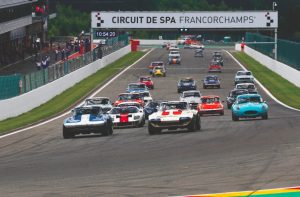 High points of the Low Countries

Other races saw 60 epic Touring and GT cars filling the grid for the first race of the Belcar Historic Cup, with Leonard Batenburg from the Netherlands driving his BMW M3 E30 to two victories with little competition.

In the Dutch NKHTGT Championship Swede Kaj Dahlbacka and Dutchman Michiel Campagne fought a fierce close battle in the first race of the weekend in their Chevrolet Corvette Grand Sport V8s, with victory for Sweden by just half a second. During the second race the mighty Corvettes played no significant part and it was another Swede, Kennet Persson, who won the race in his Ford GT40.  The Dutch Colmore YTCC championship attracted an impressive field of 70 cars for their three races over the weekend. Kasper Aaskov from Denmark won the first two races in a BMW M3 E30. His fellow countryman Steffen Gregersen then also took  his BMW M3 E30 to victory in the closing third race of the weekend. 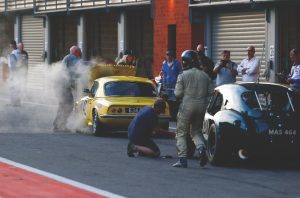 The Adams and Griffin Elan barely made it the finish

Like the YTCC, the NRCC and CSCC Sports & Slicks combined series featured three races over the weekend. A colourful mix of modern GTs, Touring cars and many other types, including Vipers, Ferraris and Porsche GT3s, took possession of the racetrack.  Briton Stephen Nutall claimed victory in the first race in a Caterham Supersport, ahead of Martin and Morgan Short in their Mosler MT900R.