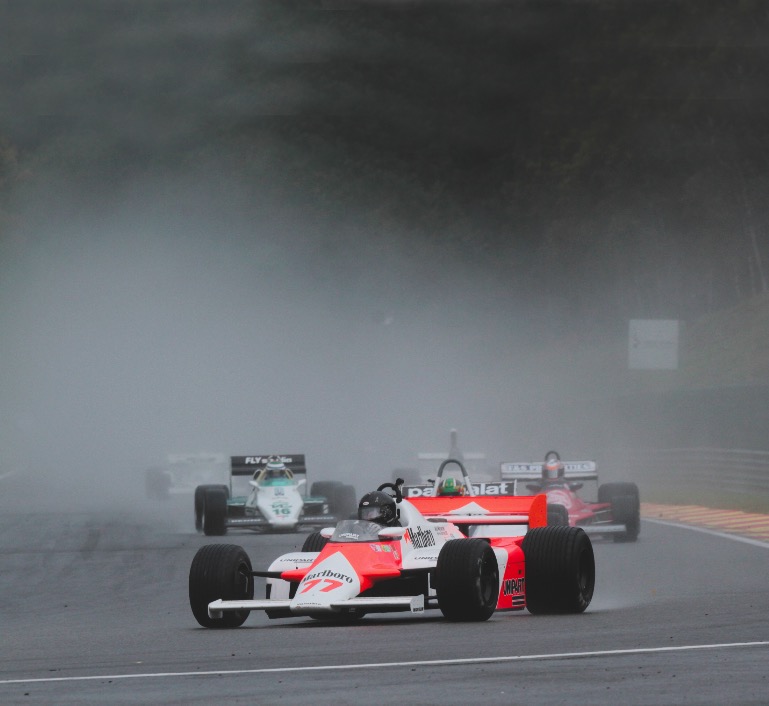 Sixty years after Belgian hero Jacky Ickx scored the last Le Mans 24 Hours victory for Ford’s GT40, with Jackie Oliver, 14 late-built versions of the icon started odds-on favourites to win the 27th Spa Six Hours, highlight of the Historic racing season, on September 28.  The following day 70 plus GT40 evocations lined-up in echelon along the Formula 1 pit wall and were flagged away by Jackie Ickx for a two-lap celebratory cavalcade.

The FIA Appendix K-spec GT40s filled the top 10 places in qualifying. Another Belgian ace and former F1 driver, Eric van der Poele, secured pole, from which Ford Motor Company’s President, New Business and Technology, Jim Farley had the honour of starting at 15:55 on the Saturday, in the damp with 98 cars behind him, from the period downhill grid preceding the daunting Eau Rouge left-right and the ascent to Raidillon. No pressure then!

Photos Eric Sawyer
“The car didn’t miss a beat, but the traffic was unpredictable.  I must have used four of my nine lives, but it was a fantastic team result,” said the Scot, third on his GT40 debut with the same team last September.  Attrition derailed several GT40 challenges. David Hart crashed at Blanchimont, while Tony Wood/Martin Stretton, Oliver Bryant/James Cottingham (engines), and Farley/van de Poele (transmission) broke.  Oeynhausen’s was towed in with a flat battery, but resumed, Verdonck setting fastest lap in salvaging eighth. 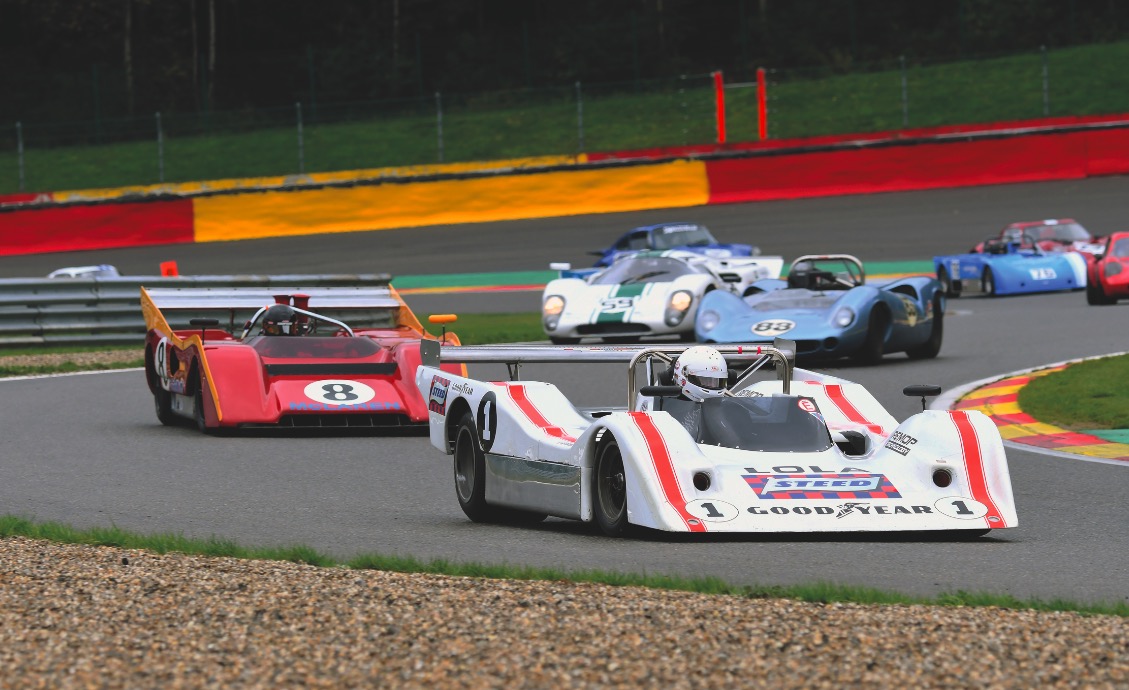 The HSCC closed wheel race was a mixed bag, from a Jowitt Jupiter to Minis to Can-Am cars. Here Georg Hallau is on his way to victory in the  rst race in his Lola T310

Six 26R-spec Elans qualified within 1.6secs, Hancock’s Tom Ebbs prepared machine the quickest in 22nd place.  Eighth last year, Portugal’s Gonçalo Gomes/James Claridge improved to seventh, while quintuple class winner Oliver Stirling, having switched teams from Graham Wilson’s to join Rob Fenn/James Barclay, finished 10th.  Wilson’s broke its transmission entering the pits, incidentally.  Michael Schryver – overall winner with Hadfield in 1997 and ‘98, when his Chevron B6 was eligible – was in the mix before a monster spin at Raidillon in his Shapecraft coupe. Richard Meins/Chris Lillingston-Price have endured rotten luck in GT40s over the years but their white example, finished with a flourish by Andy Bentley, wound up fifth having demoted the AC Cobra of Belgians Thierry de Latre du Bosqueau/Christophe van Riet on the final lap. 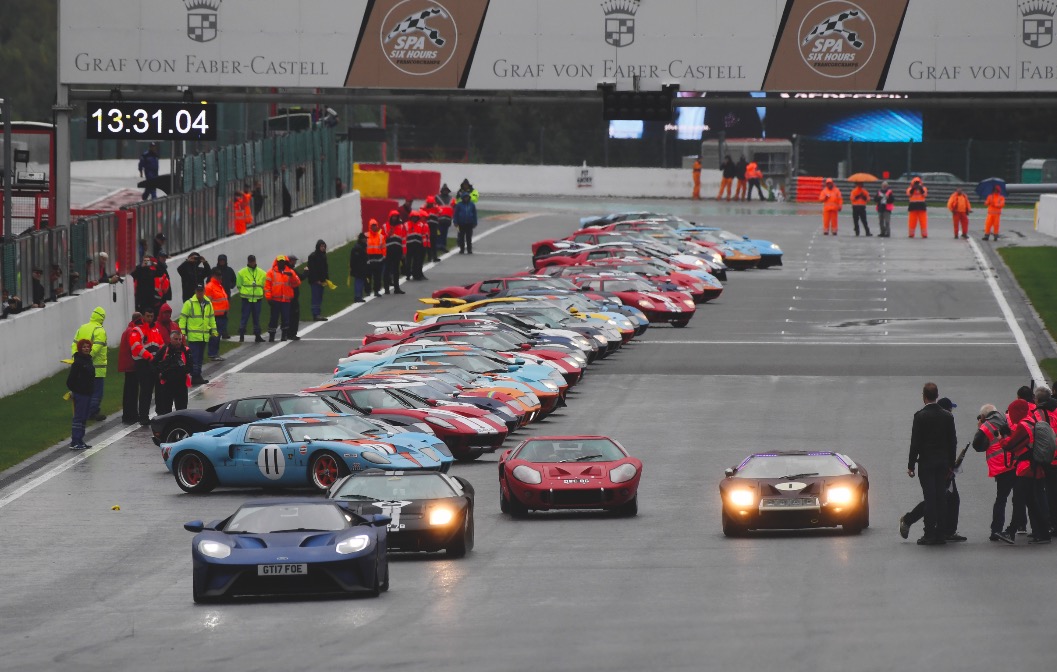 70 plus GT40 evocations lined-up in echelon along the Formula 1 pit wall to celebrate a famous victory.  Photo Jeff Bloxham

Among the class winners was the 13th-placed Marcos-Volvo 1800GT GTP of Belgian-based Dutchman of Scottish extraction Robert Hamilton of Silverton Hill, co-driven by Donald Molenaar and Luxembourg’s Philippe Vermast, who also shared the CT10- winning Ford Falcon with compatriots Charles Kaufman and Patrick Wilwert.  The top US-built car home, though, for the fourth time in five seasons, was the 14th placed Shelby Mustang GT350 of Nick Sleep/Joel Wykeham/Alex Montgomery, rewarding mechanics who changed its engine after qualifying. 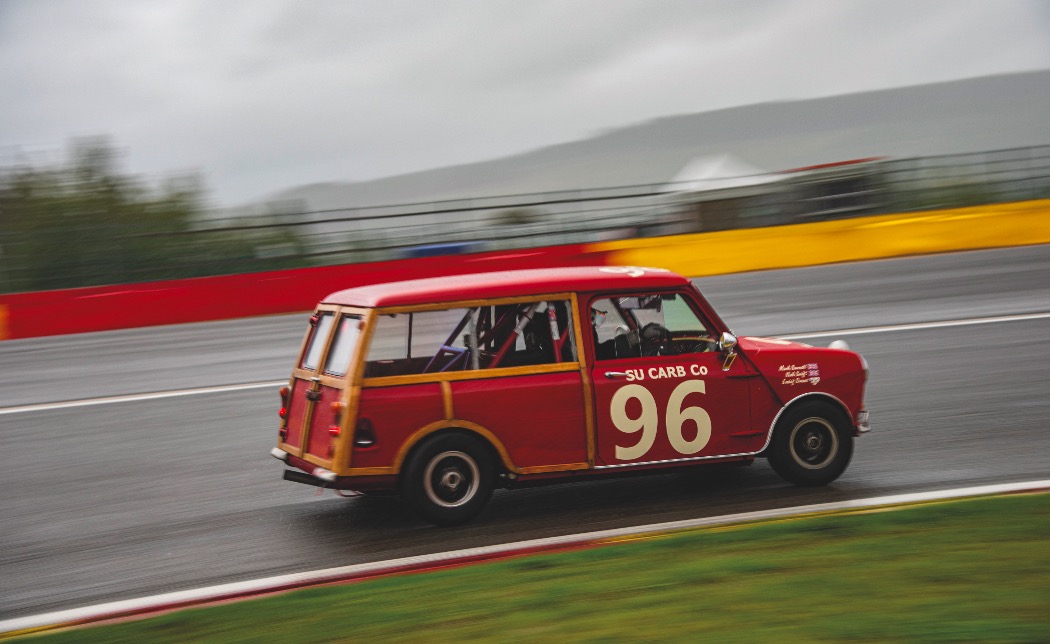 For results and a full rundown of all the other races at Spa Six Hours race meeting, see our November issue