First run in 1993 on the hallowed Francorchamps circuit, Roadbook’s Spa Six Hours remains the world’s favourite endurance race for Pre-1966 cars, this year run on 30 September.  The number of teams was a little over 10 per cent down this year – 90 cars turned out for qualifying – but the coveted Belgian prize gets no easier to win.  While the 7.004 kilometre circuit remains unchanged, the glorious backdrop between La Source and Eau Rouge looked very different to regular pilgrims.  Gone were the lofty grandstands opposite the charismatic old pits, replaced by not yet fully greened grass banks, while beyond the rallycross arena cutaway to the outside approaching the spectacularly steep climb to Raidillon, hectares of gravel were installed everywhere.  Superbike-friendly, but guaranteed to trap cars… 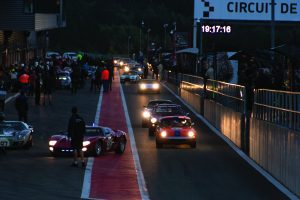 Eighteen Ford GT40s, most late-built to FIA Appendix K pattern using Gelscoe or Superformance hardware, formed 20 per cent of the entry.  Only if prolonged torrential rain visited the Ardennes on Saturday afternoon or evening did pundits envisage any possibility of a GT40 defeat.  That didn’t happen.  Dutchmen David Hart, his son Olivier and Nicky Pastorelli scored the model’s 15th victory and extended its unbeaten run to 11 years.  Fittingly, the first GT40 win in the event founded by Alain Defalle was achieved by Belgians Jean ‘Beurlys’ Blaton, Willy Braillard and Pierre Dieudonné in ‘93.  A ceremony to scatter the ashes of Blaton, the 11-time Le Mans participant who died in December 2020, aged 91, during the Covid-19 lockdown, was held before racing began. 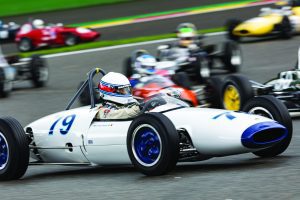 Following a fine Friday, culminating in evening qualifying for intrepid subscribers from 16 nations, heavy precipitation drenched the venue overnight.  But Saturday’s big race started on time – a welcome novelty – at 16:00, on a dry track, and the forecast rain only arrived after dark. 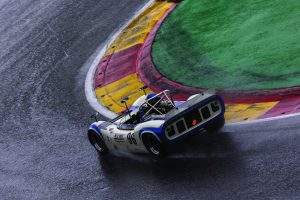 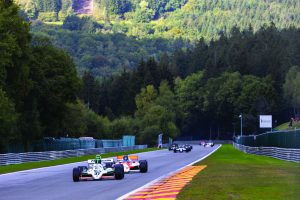 For a full report of al the classes and the supporting races, see our November 2022 issue, also available in digital format….