Entries may have been small across promoter Motor Racing Legends core grids for the first Snetterton Historic 200 event on 16-17 July, but quality action embroiling wonderful cars, with strong HRDC supports, entertained an unusually large spectator turnout.  With focus, Duncan Wiltshire’s organisation and MotorSport Vision, owner of the venue which hosted non-championship F1 races in the early 1960s, could be grown into something really special.  Marcus Pye Reports..

Not much traffic in Pall Mall 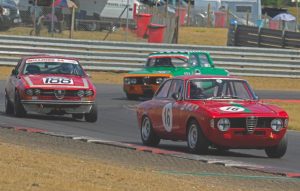 Gareth Burnett in his Alta Sports won the pre-war race

Busiest of the HRDC’s triumvirate was Sunday’s Dunlop Allstars slugfest, won by Matt Moore ( a winner at Silverstone the previous day in an Austin 7 Ulster) in his AC Cobra, who kept Mike Thorne (Shelby GT350) behind. The race ended dramatically for pals Andrew Giles and Gerry Buggy whose Elans collided heavily at the ‘Searpin’.   They shared a Lotus Cortina in the subsequent Jack Sears Trophy contest in which the similar cars of Mike Gardiner and British Touring Car title contender Josh Cook, Mark Burton/Graham Pattle and Craig Jamieson finished 1-2-3.  Aimee Watts soloed father Patrick’s Mini Cooper S to a superb fourth ahead of Tim Scott-Andrews’ Ford Falcon.

Read more in our August 2022 issue