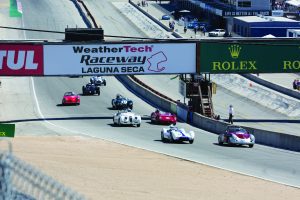 This year’s focus was on the 100th anniversary of the 24 Hours of Le Mans, drawing a greater attendance in terms of race entries (over 400) and spectators than usual, with a Le Mans Heritage display showing off 51 Le Mans-winning cars and representing the milestones in the historic 24-hour event.  Mr Le Mans himself, Tom Kristensen served as Grand Marshal, and as part of the celebration there were specific races for four eras of historic Le Mans cars.  It is the first time the Monterey Reunion has been dedicated to a motor race rather than a marque of car.  A revamped schedule that ran from Wednesday 17 to Saturday 20 August,  with most grids having their usual two races, meant this year the ‘feature’ races were on Saturday instead of Sunday, leaving competitors free to attend the concours at Pebble Beach.  This made way for a hillclimb up the Corkscrew in reverse direction on Sunday, a novelty causing some debate among drivers and spectators prior to the event, but universally approved of afterwards.

For the full report of all the racing, see our October 2022 issue…