The 2019 Rolex Monterey Motorsports Reunion at Laguna Seca, the scenic circuit that winds around a mountain top in the highlands just east of Monterey in California, was both a continuation of a great tradition and also a new beginning for the event.  Organisers, SCRAMP were under the direction of new CEO Tim McGrane and, while he certainly qualifies as an experienced hand, it was nevertheless the first time out of the gate for him and many new team members.  The general consensus in the paddock was that the event is in safe hands.  None of this was hurt by the fact that the Rolex feature races were favoured with great weather, sunny but cool, and that the paddock was packed with wonderful, historic cars, with some 550 racers driving cars from 1910 to 2014.

Group 2A for 1955 – 1961 Sports racers produced a great dice between the Sadler Mk IV of Greg Meyer and Fantasy Junc on’s Spencer Trenery in a Cooper Monaco. A short pace car interrup on did nothing to cool the pair’s ardour, un l Trenery’s Cooper began to fade from the lead and  nally pull o , promo ng Al Aciero (Lister Knobbly) and Rob Walton (Birdcage Masera ), who’d been having their own entertaining dice, to second and third respec vely.  Photos Eric Sawyer

This year’s featured marque was IMSA, celebrating the 50th anniversary of the International Motor Sports Association with their racing history gorgeously displayed in a bespoke pavilion featuring many of the marques and models that raced in IMSA.

After practice on Thursday and Friday, the 14 classes, or as the Americans say, “Run Groups”, began with morning races, with Rolex Feature races running in the afternoon. 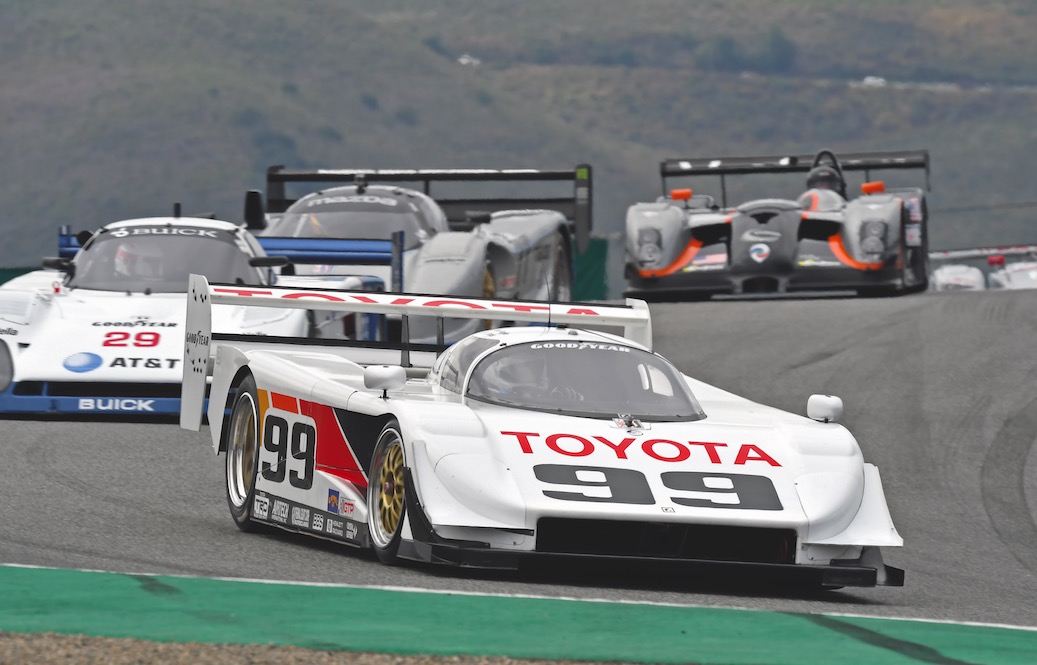 Paddins Dowling (ERA R2A), Charles McCabe (ERA B) and Chris McAllister made it an ERA rout in the pre-1940n class, while the Sadler Mk IV of Greg Meyer was top pre-’61 car after Spencer Trenery had to park his Cooper Monaco.  In the Formula 1 contest globe-trotting Brit Greg Thornton held on to the lead in his Lotus 91/5 in an eventful race that included a pace car period and stoppage for two blown engines, and ructions on the track when Ethan Shippert lost the rear wing of his Tyrrell 10 and yellows flags flew. 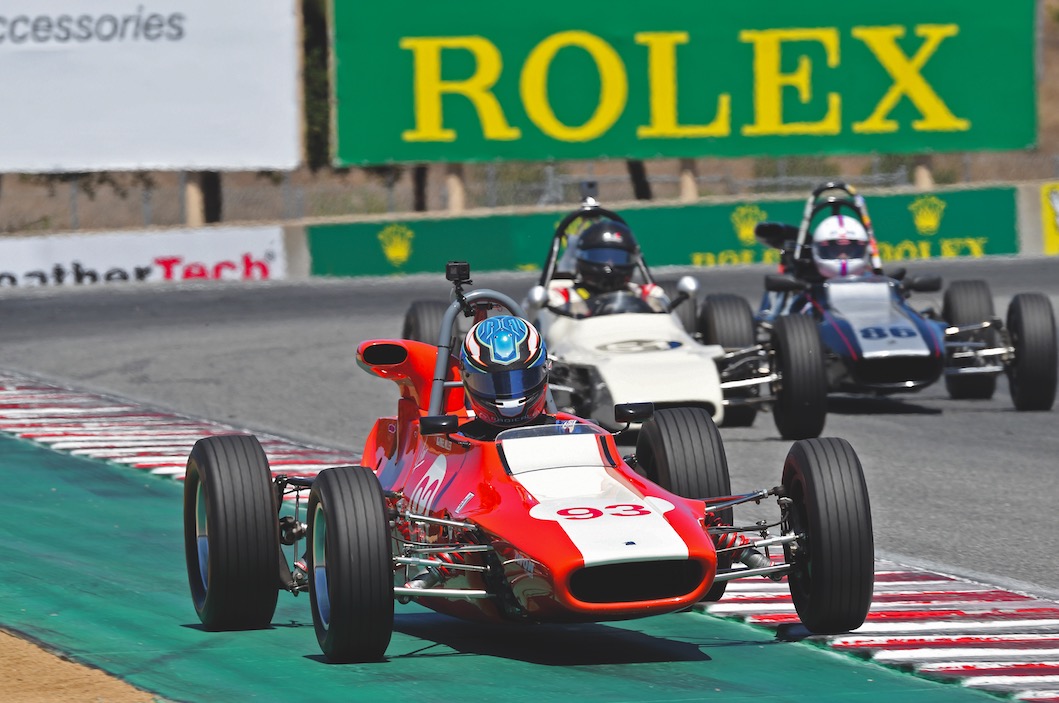 The grid for FIA, IMSA, GT, GTX, AAGT up to 1981 brought out BMW 3.0CSLs, Datsun 280Z, Triumph TR7 and 8 and Corvettes, but was dominated, numerically at least, by Porsche.  Standouts included a fleet of Porsche 935s including Bruce Canepa’s, which assumed its familiar position at the front of a chasing pack, with another 935 and two Corvettes giving chase just behind.

Saturday’s proceedings culminated in the Rolex race for IMSA Prototypes – GTP, WSC, LMP, DP, celebrating the 50th anniversary of IMSA.  The 1991 AAR/Toyota Eagle Mk III GTP of Charles Nearburg held pole as they picked up the pace car for the warm-up lap with the 1992 Mazda RX7-92P of Joel Miller slotted in behind.  These two would race nose to tail for the 14 laps of the race, the chasing Mazda singing the Rotary’s trademark otherworldly song.  Bruce Canepa’s Canon liveried 962C had lost its windscreen in the morning qualifier and, while it was repaired in time to make the grid, the mishap placed it down the order at the start.  A standout drive saw it climb through ranks to finish third.  The top three all set faster lap times than the winner of the Masters Formula 1 race. 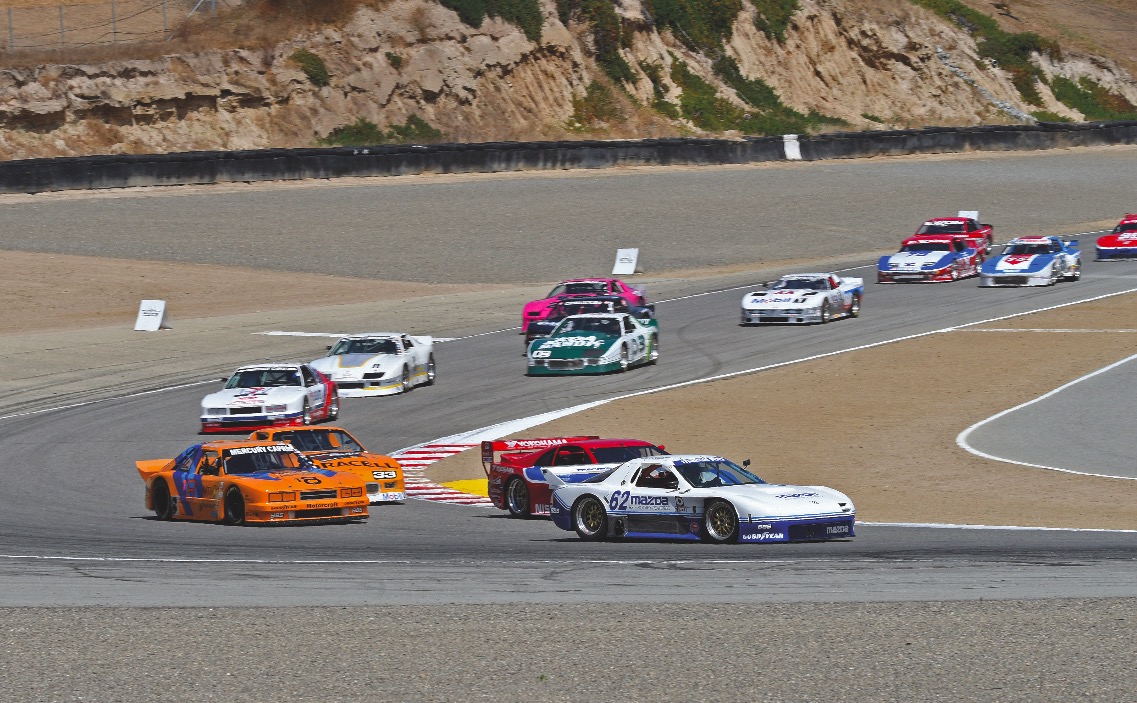 Sunday’s racing began with the Sports Racers and GT car of the pre-1955 era, which meant the lion of Britain roared at the front of the pack as it often did back in the day.  Winner John Bowe kept his 1952 Allard J2X just ahead of John Buddenbaum’s 1949 Jaguar Parkinson Special, with Gary Cox rounding out the podium in his Austin Healey Chevy Special.

Group 6B for 1981-1991 IMSA GTO/GTU was Sunday’s feature race, with 33 loud machines shaking the asphalt and making earplugs mandatory.  The song of the 4-rotor powerplant in Joel Miller’s Mazda IMSA RX-7 in particular filled the Monterey grandstands. 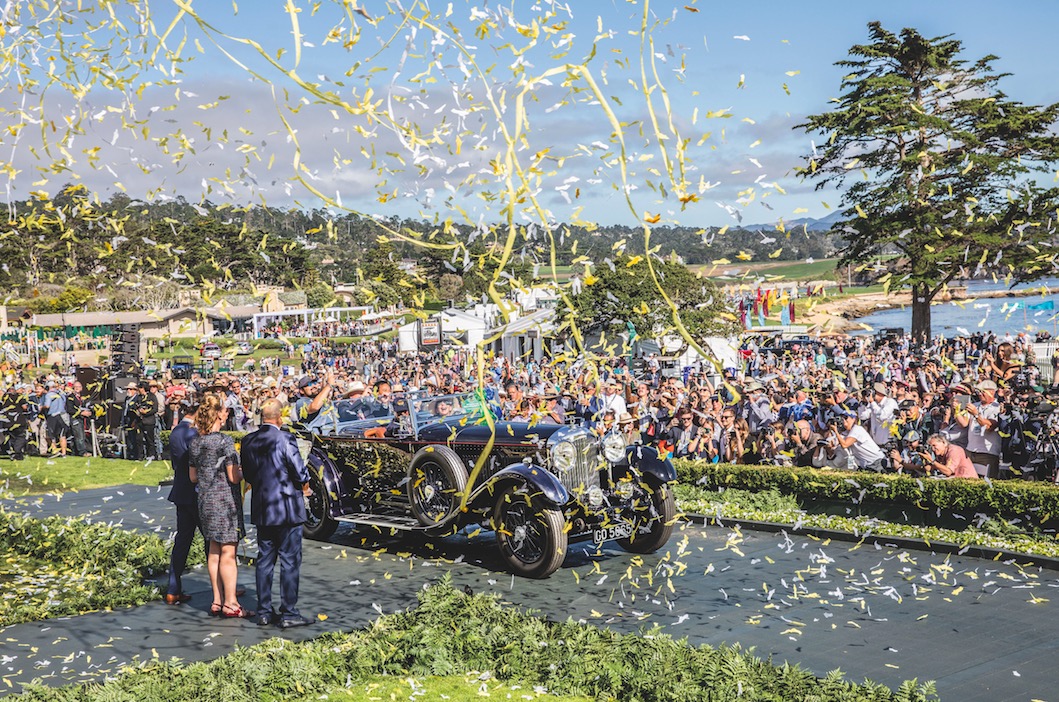 For a full race-by-race report see our October issue