Rock Around the Clock

The final countdown to the 30th anniversary edition of the 2 Tours d’Horloge, the only true 24-hour race for historic cars, has begun, with Eric Van de Vyver and his team ready to welcome over 40 crews to the Paul Ricard circuit on 4-6 November.  A real test for the 24-hour event, the 6 Hours of Magny-Cours, run in March, saw victory for Sébastien Crubile and Pascal Duhamel at the wheel of the Pascalou Racing Porsche 930 Turbo, with which the team will try to achieve the double with the reinforcement of Romain Rocher who competed in the 2 Tours in 2021. 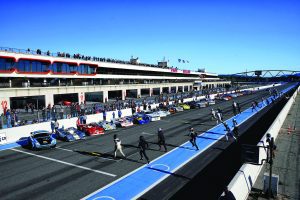 Entered last year for the first time, the crew composed of Armand Mille/Max Guenat/Guillaume Mahé/Erwin France was second overall and winner of the TC4 category with an authentic BMW 635 Group A that participated in the European Touring Car Championship and the Spa 24 Hours with Thierry Boutsen at the wheel.  Preparing the car is Team Europe, who also plans to strengthen its presence with a second BMW.  Other teams entered under the colours of German marques include the one managed by Alain Cudini, former French Touring Car champion who has 13 Le Mans 24-Hour participations on his CV, and who will field a Porsche 944 S2 for Arnold Noret/Franck Hardonniere/Bruno Vieren and a 911 3.2 for Christian Noret/Jacques Colibet/Philippe Vigneron.

Newcomers, Team Bersi Immobilier will line up a 911 3.0 RS for Damien Kohler/Richard Depagneux/Christophe Van Riet and Grégoire Audi, and in the prototype category, an original Porsche 906 entered by the Italian crew Silvio Perlino/Mario Sala/Maurizio Fratti will return this year.  A wide diversity of cars is expected, with a Grac MT-14B of the Ecurie Chateaux Sport Auto to be driven by Axel de Ferran, Bernard Zimmer and the Belgian Freddy Loix; the TVR Griffith 200 of V de V Sports for Henri Leconte; the Chevron B16 for Didier and Julien Gruau, Maurice Bouvet, José Beltramelli, and the aptly named British Team Rosbif with two Tiga SC 83s for the father-and-son trio of Ross, Charlie and Nick Hyett and Chris Snowden/Mike Fry/David Houghton respectively.  Returning after a great experience last year (see our February 2022 Issue) will be British Team Sleep, with the Rover 3500 (winner of the  1982  French Production Car Championship with René Metge) entrusted to Nick Sleep/Joel Wykeham/Alex Montgomery.  See https://vdev.fr for entries.