Rallying for the Next Generation

HOME » Magazine » May 2022 » Rally News » Rallying for the Next Generation

Staged in brilliant early spring sunshine on 25-27 March, Rally the Globe’s first-ever Generations Rally, centred in the poetic English Lake District National Park, was a great success on many counts.  Created specifically to introduce potential future endurance rally competitors – notably those of a younger age – to historic rallying, the innovative event was open to driver/navigator crews of distinctly different generations in both vintage and classic car categories.  The concept was so well received that all 75 entries were snapped up well in advance by competitors from France, Germany, Holland, Ireland, Italy and Switzerland as well as the USA.   Nearly 50 of the participants were aged under 30 with a significant number of super-keen female competitors.  The youngest of all was Patrick Blakeney-Edwards’ son James doing his first rally aged just 13. 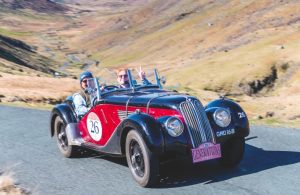 To bring novices quickly up-to-speed, tutorial sessions on navigation and endurance rally skills were organised in advance and the short three-day format was designed to enthuse rather than to alarm new recruits.

Victory in the vintage classification went to racer Martin Hunt and his young co-driver James Galliver aboard the former’s 1937 Frazer Nash-BMW 328 roadster.  Among the more recent Classics, the spoils went to Stephen and Alexander Chick in their beautiful 1959 Austin-Healey 3000 Mk1. 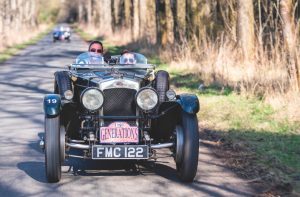 “It was just fantastic,” enthused a delighted Martin Hunt.  “The big bonus, of course, was the incredible weather, but the route was every bit as spectacular – we travelled through parts of England I never knew existed.”

Indeed, it was such a sell-out success that Rally the Globe has already announced next year’s event is to be held on the same weekend in 2023.