Originated in 1954 as a non-championship Formula 1 race, the Oulton Park Gold Cup evolved over many phases before becoming North West England’s contribution to British Historic racing’s landscape. In a bid to counter a decline in support in recent years, exacerbated by COVID-19 and travel restrictions for overseas competitors, and a seemingly fait accompli sequestration of its traditional August Bank Holiday date by Classic Silverstone, circuit group owner MotorSport Vision instigated a broader selection of races on 29-31 July this year, inviting some from outside logistics organiser HSCC’s portfolio. The remix broadly went down well, pointing the way towards restoring the event’s status. Marcus Pye reports.. 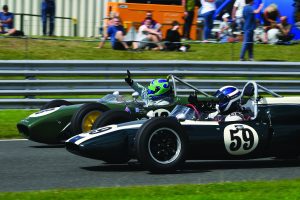 Sam Wilson’s tenacity in the ex-Team Lotus 18, running a 1500cc Climax engine up against 2.5 litres of Cooper T53, driven by Charlie Martin, nearly paid off, as the pair crossed the line together on the last lap. Photo Jeff Bloxham

The Historic Grand Prix Cars Association took centre stage with a magnificent grid, although sadly John Spiers’ Maserati 250F – harking back to Stirling Moss’ victories in the first two Gold Cups of 1954 and ‘55 – was a race one casualty at Cascades. Saturday’s damp contest resulted in a resounding victory for Andy Willis in Charles McCabe’s fabulous BRM P48-7, the chassis in which Graham Hill finished third in the 1960 event. The sonorous V8 was chased home by Sam Wilson in Clinton McCarthy’s ex-Team Lotus 18 372, running its 1500cc Climax engine (as opposed to the F1 2.5-litre FPF), thus as Jim Clark won the Kentish 100 F2 race in it at Brands Hatch in August 1960. Sunday’s stanza – restarted after an unfortunate first corner melee that eliminated Stephan Jöbstl (Lotus 24), Klaus Bergs (Lotus 18), Julian Ellison (Assegai-Alfa Romeo) and Guy Plante (Cooper-Bristol T23) – will live long in the memories of onlookers around the undulating circuit. Willis retired after a grassy early excursion, leaving Martin and Wilson to slug it out. The Cooper’s extra litre of engine capacity – worth several miles per hour through the three speed traps – was negated by the agility of the tenaciously driven Lotus in the slower corners, but 13-time Silverstone Classic Formula Junior winner Wilson wasn’t daunted. He seized his opportunity on the final lap, coming off Cascades to sit on Martin’s gearbox then taking the left-hand Island kink flat and diving inside his rival into the Shell Oils hairpin. 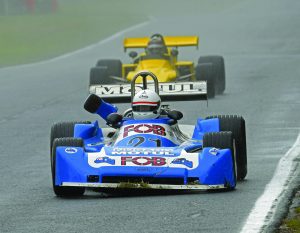 Matthew Watts debuted the Martini Mk19/23 but a first lap incident eliminated him from the first F2 race. Starting from the back, he came third in the second race. Photos Eric Sawyer

Down through the Brittens chicane and up over Hill Top Wilson held sway, before braking as late as he dared into the Hislop’s chicane. But he marginally overcooked the exit in his endeavour to maximise his speed for the flick through Knickerbrook onto Clay Hill, touching the grass. As the tail kicked out, sapping momentum, he was back on the power hard, but despite placing his steed centrally for the incline – where the Cooper was visibly quicker – Martin charged past with two wheels on the grass. 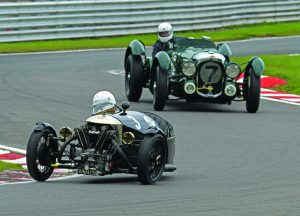 Spectators enjoyed watching the intrepid Sue Darbyshire in her Morgan-JAP three-wheeler get the better of some much bigger machnery in the VSCC Egerton Cup race.

Top trumps in the HSCC pack was Historic F2, competing for the Niki Lauda Trophy. Drivers from Austria, Australia, France and Switzerland enriched the field. Once 2021 victor Matthew Watts – saddling the ex-Xavier Lapeyre Martini-BMW MK19/22 this time – was launched by Mark Hazell (March 782) at Hislops on lap one of Saturday’s leg, there was no catching Matt Wrigley (ex-Rad Dougall Toleman Group March-Hart 782). Mark Dwyer (March 742) inherited second on day one when the rear wheel of Samuel Harrison’s superbly driven 1600cc Lola T240 worked loose and fell off on the slowing down lap.

Watts chased Wrigley and Dwyer back on Sunday, when Chris Porritt (ex-Alo Lawler Chevron B29), who finished fifth behind Martin Wood (March-BMW 782), claimed Atlantic honours. First of the Pre-‘72 1600cc F2s, as so often, was Robert Simac whose perfect score moved the Alsatian closer to a seventh crown. 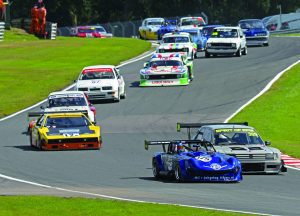 Back where Derek Bennett’s voluptuous little Chevron GTs earned their following from 1966, Steve Nuttall scored his second runaway Guards Trophy victory in the wet, at the wheel of a late-built B8, originally a road car.

The TVR V8s came into their own in the Masters Gentlemen Drivers Cheshire TT set, Nigel Greensall/John Spiers outrunning Mike Whitaker in the one-hour race, while Touring Car fans were entertained by a tremendous HRDC Jack Sears Trophy 1958-‘63 miscellany. 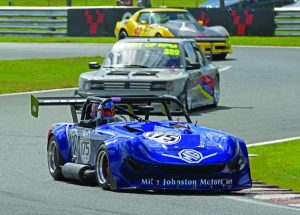 The second HSCC Griffiths Haig Trophy ‘50s drum-braked sportscar double-header had two stars in diverse cars, Richard Wilson’s ex-Jim Hall/Carroll Shelby Maserati 250S – a combo in a class of its own – and Ryan Morgan who wrung the maximum from Paul McDougall’s 851cc flat-twin Panhard Junior to finish fifth in the wet on Saturday.

For the full report see our September issue – now also available on line…..