A regular fixture for the Dutch National NKHTGT Championship, competitors gathered at their home circuit of Assen on 5-7 August for their fourth round of the season.  The series, for GT and touring cars also accepts some prototypes by invitation, but this time they shared the track with the German-based Triumph Competition & British HTGT cars, so no prototypes were on the grid.

In a busy qualifying session that was interrupted by a long red flag period, the Lotus Elans came to the fore, with Luc de Cock just 0.1 of a second quicker than Jos Stevens.  Roelant de Waard was not far behind in his GTS12 Shelby Mustang, while Bob Stevens could not match these lap times in his Elan due to coolant leaking on to his rear tyres.  Multiple Assen winner Andy Newall could not make it to Assen, which meant Rhea Sautter was driving both races on her own.  She qualified fastest of the E-types and second in GTS12.  In the touring car division Bart-Jan Deenik was fastest of the Falcons by a second from Cees Lubbers, Jaap van der Ende and Henk van Gammeren who were all within 1/10th of a second. 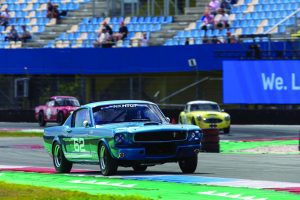 Many races are won or lost in the first corner, and that is what happened in Saturday’s race.  De Waard made a demon start from the second row to take the lead in the first corner as Jos Stevens’ Lotus Elan proved short on grip.  The Elan driver tried to hang on but eventually the car swapped ends and he had to let the whole field pass before he could re-join.

On Sunday de Waard again took the lead from the start, with a determined de Cock in pursuit.  Deenik also made a good start amongst the touring cars and carved out a healthy lead until a half-shaft broke, leaving him stranded in the complex after the first corner and bringing out the safety car while the stricken Falcon was towed away.  With the green flags waved, De Cock found himself in the middle of the fastest of the MG/Triumph guest drivers on their stickier tyres.

The demise of Deenik made for a great scrap in class CT10.  Initially Cees Lubbers had been ahead of the Falcons of Martin Bijleveld and Henk van Gammeren.  After a couple of laps Bijleveld managed to pass Lubbers, but it was Roel Korsten who was truly on the move.  Having started on the back row he passed all and sundry and finally finished fifth overall to take the CT10 class in his Ford Mustang.

Roelant de Waard’s two wins have propelled him to the top of the championship points table with a healthy 137 points.

For the full report see our September issue…