On May, 29 Ben Huisman passed away.  Ben was an instrumental figure in Dutch motor racing from the late sixties onwards and was instrumental in saving the Zandvoort circuit in the early ‘70s.   Among many other things, he was one of the founding fathers of historic racing in Holland.  Ben’s last race car was a red Ford Falcon Sprint, which he used to great effect in the European historic touring car championship in the early 1990’s.  It was fitting therefore that a red Falcon was present when a final salute was given to Ben at his beloved Zandvoort track during a well-attended memorial gathering.  Ben’s wife Nellie and son Duncan took his ashes around the track one final time in Cees Lubbers’ Ford Falcon, before scattering them near Tarzan Corner.  At Assen in early August, Cees drove a pair of impressive NKHTGT races in the Falcon to finish second overall in the combined results – his best result yet.  At the prizegiving, he dedicated his trophy to the memory of Ben Huisman, which was quite an emotional moment. 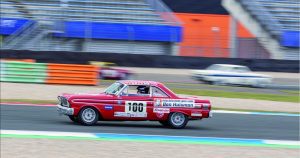