The NKHTGT celebrated its 25th anniversary at the Circuito de Catalunya near Barcelona, offering season entrants a free pair of races to celebrate the milestone.  Supporting the Hankook 24 Hour Series, the Dutch Championship racers got set up and ready to qualify on Friday, with a 50-minute night race on Friday and a 30-minute Saturday morning race.

While it had been sunny and warm all day, there was a rain shower during qualifying at which Andy Newall excelled in the E-type that he shares with Rhea Sautter.  Frans van Maarschalkerwaart took P2 thanks to a super-fast lap in his Shelby Mustang GT350 when it was still just about dry.  Michiel Campagne (Corvette GS) and Mark Dols (Marcos 1800GT) qualified on row 2. 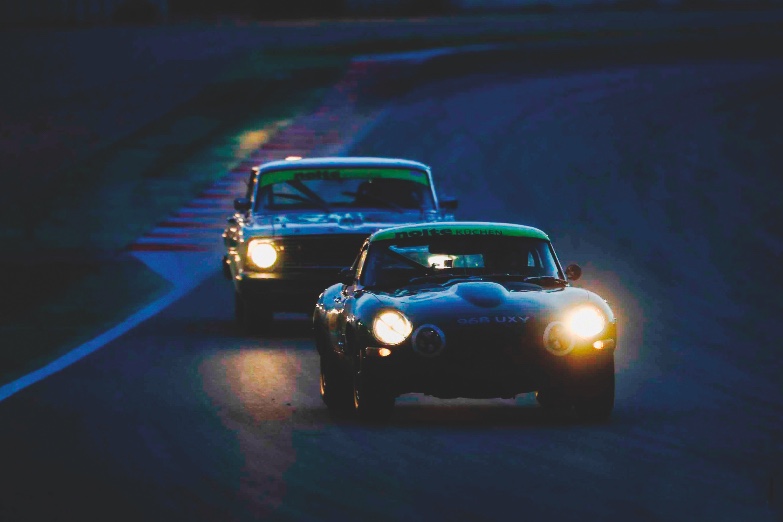 A good number of NKHTGT drivers made the trip to Spain. The programme included a night race for them

At 8pm on Friday, it was time for the evening race.  Campagne took the lead at the start, followed by Armand Adriaans in this “normal” Corvette.  On lap 7, Adriaans came to a stop in a dangerous spot, calling out the safety car.  A number of drivers benefited from this, in combination with the opening of the pit window.  Campagne left his stop too late, allowing Newall, now in the E-type, to take the lead ahead of Norbert Gross (Ford Falcon) who had passed Martin Bijleveld in the pits, and Erwin van Lieshout who made a giant leap into third with his Porsche 911.  Campagne managed to recover to second place but could not catch Newall.  As darkness fell the E-type came home with a lead of over a minute.  Gross took the third podium spot and won the touring car class.

The following morning, shortly after the start, Hemmo Vriend’s Ford Falcon broke down, and once again the safety car was called out.  This caught most drivers by surprise and caused chaos.  When the dust had settled, Campagne was in the lead, with the Ford Falcons of Jaap van der Ende and Norbert Gross giving chase ahead of a group that included van Maarschalkerwaart, Thijs van Gammeren (Ford Falcon), Rhea Sautter and Mark Dols’ Marcos.  Van der Ende was safe in second place when Gross had to pit to remove a flapping Falcon wing, while Sautter fought her way through the crowd to take third, and van Maarschalkerwaart, van Gammeren and Jac Meeuwissen completed the top 6.  Shadowing Meeuwissen’s big Healey home was Thijmen de Vries who drove a mighty race in his little Cooper S to finish seventh.