For vintage bike enthusiasts, the Motogiro d’Italia is to motorcycles what the Mille Miglia is to car drivers.  It is the re-enactment of the oldest and most prestigious Italian motorcycle road race.  Born in 1914, it also ended in its pure racing form in 1957, the year of the abolition of all road racing in Italy after the terrible accident at the Mille Miglia. 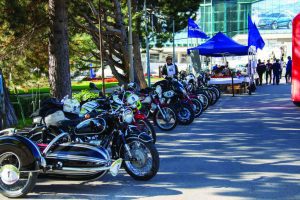 A bit like the Tour Auto, it was resurrected in 1967 for a few years by the Italian Motorcycle Federation, but this time as a road time trial and not as a full race. Terni Motoclub re-launched the event in 1989 and was soon attracting large numbers of participants and media coverage (see our report in the July 2015 issue).  For 2023 the FMI will once again be closely involved in the organisation of the event, which will take place on 21-27 May, 2023.  The FMI brings with it some changes to the classes, and the addition of a class for modern bikes.  They have also added the category “Scooters from 1970 to the present” given the large number of enthusiasts who ride them daily on Italian roads. However, these will be placed in the categories in which they participated in the golden years of the event.  The route averages about 1600kms over six days in and around some of the original Motogiro routes in Tuscany and Umbria and attracts 80% of its competitors from outside of Italy.

In the words of our reporter in 2015, “Love historic motor sport, love endurance rallying, love Italy, love food, love good company?  If you are also prepared to love motorbikes then look no further than the Motogiro D’Italia.”  See www.motogiroitalia.it for more details.