Fine hot weather and the joy of returning crowds lining the routes and town squares greeted participants in the Mille Miglia run on 15-18 June. Entries were up 25% on last year and over 400 cars were chosen to take the start. Navigating their way through the time trials (some even on dirt) that have taken the place of the original 1950s road race, Andrea Vesco and Fabio Salvinelli won again in their 1929 Alfa Romeo 6C1750 Zagato. For local Vesco from Brescia it was his third consecutive victory. In second, also like last year, was crew number 40 formed by Andrea Luigi Belometti and Gianluca Bergomi in a 1929 Lancia Lambda Spider Type 221. It was a relief then that Silvia Marini and Irene Dei Tos in a Bugatti T40 were new winners of the ladies cup. “It was the 1000 Miglia of the return to normality,” commented Aldo Bonomi, president of AC Brescia. “We want to believe that this is a new beginning after difficult years, a return to sharing our race with the people”.] 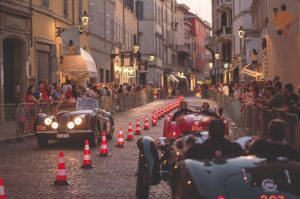 Crowds returned to the streets as here in Parma