“The Winner is the Won who Enjoys it the Most”

Many regular competitors in the classic motorcycle Moto Giro D’Italia (see our Oct 2022) also choose to take part in the MC Piston rally based in Cantabria Spain, this year run on the 18-25 September.  It was the 35th anniversary for this pre-1980 bike event which has continued to grow in popularity, now with over 400 entrants and pleased to welcome more women riders this time than ever before. 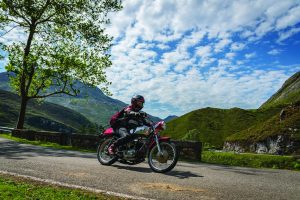 Held mostly in and around the stunning and sometimes remote Picos mountains, it is based at event Hotels in first Potes and then Santander.  Daily routes incorporate fabulous scenic roads with little traffic and a seemingly never-ending series of jaw dropping, sunny vistas around the many, many bends.  Stops included everything from small characterful cafes, for say a delicious Cortado and Pinchos, to an impressive three course steak lunch laid on for the many hundreds descending on a grand Parador resort Hotel. 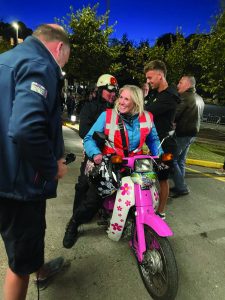 It’s a positive fiesta of classic motorcycling, with every conceivable make and model represented.  For example, the early pre-war Triumph of Englishman Mick Campbell,  whose image appears on the rally plate, or the three post war Vincents, ridden by Vincent and his daughters Anne and Hilde Speet from Rotterdam, or Kevin and partner Sharon from Devon, she riding pillion with him on a much modified 1976 Kawasaki Z900.  One Dutch couple rode what they said were two of the rarest sports Ducatis known to mankind, while there were many less often seen breeds or unusual models from Ossa, Laverda, Benelli and even a Zundapp.  Seeing so many varied types of British makes of BSA, Matchless, Norton and AJS, they became almost mundane.  There was a bewildering array of Japanese bikes.  I chose a 1979 BMW which unsurprisingly proved far too common, but thankfully reliable.

The week climaxes with the day of the ‘5000 curves’.  It’s a simple time trial of over 330 miles, starting and finishing in Santander, but guided only by a basic Tulip type route card, and with only four checkpoints to complete.  However, the route is demanding, the curves seem limitless, and it is hard to stay ‘on time’, especially for those on the smaller or less reliable bikes.  Some locals push on pretty hard (we noticed some Spanish number plates don’t seem to travel so slowly through villages as others).  But most riders, despite leaving at breakfast time or sooner, are unable to make it back until almost nightfall.  Just under nine hours saddle time in my own case and nearly twelve hours start to finish including stops.  One couple featured him riding a big 1920s Coventry Eagle V-twin, her following on a pink Honda 90 Cub. When the British bike broke down, she carried him pillion for nearly half the route so they could still finish, almost last, but still able to claim their ‘5000 curves’ trophy. 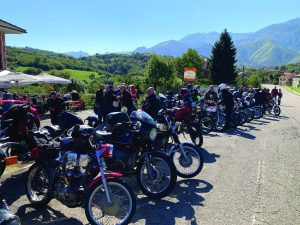 This event seems to combine a more relaxed and inclusive form of historic sport with enough of a challenge and roads to satisfy most every Classic bike rider.  Embracing the MC Piston motto,  “The winner is the one who enjoys it the most”, it is fair to say most anyone who rode that  week felt that way.   Enjoy it while you still can, lest it becomes a victim of its own success, it’s rather magical.