Supporting IMSA’s Chevrolet Grand Prix Masters USA were two Masters Racing Legends races for 1966-1985 Formula One cars on 1-3 July. Although there were only eight starters at the legendary Mosport circuit in Canada, it was Britons Jamie Constable and Lee Mowle who shared the wins. After a troubled qualifying, Constable starred in Saturday’s race by hauling his Tyrrell 011B all the way from the back, to eventually pass Bud Moeller’s Williams FW08. In a remarkable fifth place was Danny Baker finishing ahead of several F1 cars in his Ralt RT1 Formula Atlantic. Mowle in his Lotus 78 claimed the lead of Sunday’s race on lap 4 but looked vulnerable to Constable who was on another charge from the back of a reversed grid. However, he defended his lead for six laps to take victory, while this time in third, Dean Baker’s Shadow DN8 pipped James Hagan’s Hesketh 308 to the pre-78 class win. 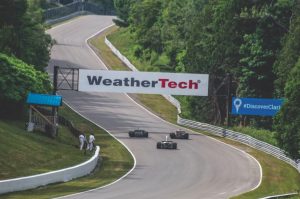