The Swedes get Started

HOME » Magazine » October 2020 » Features and Reports » The Swedes get Started

This year is like no other, and for the Swedish RHK historic racing cup, this has meant that this year’s first two competitions were postponed from spring to autumn (Kinnekulle and Karlskoga) and one has been postponed until next year (Knutstorp).  So, this year’s first race meeting wasn’t until August 22-23, when the Mantorp Classic Festival took place.

Run together with Legends cars and the Sports Cars Championship, more than 200 cars turned out, a very good number given the circumstances.  The event took place without spectators and the schedule was adapted to the circumstances, with some classes running clear before others started in order to reduce the number of people in the paddock. This meant that some had gone home before the last ones arrived. 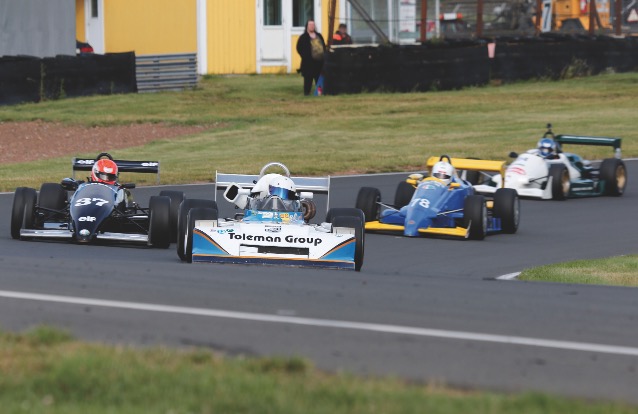 Formula Vee had kicked off the season with an invitational race that included several new drivers in the starting line-up.  It was an incredibly exciting race with much overtaking and the outcome was uncertain until the very end.

The first Formula Ford race had to be stopped prematurely when the drivers failed to slow sufficiently as they passed marshals working on the track with a stranded car.  The heat was red flagged and the drivers got a scolding.

In the Formula Slicks heat, it was gratifying to see so many F3s in the starting field.  Michaela Månlycke has gained renewed confidence driving Torgny Johansson’s March 812 F2 car,  and wise driving saw her move up the field to finish second behind Johansson in his March 782.

The 1000cc Cup usually boasts the largest starting field, but Mantorp is not a favourite track, as it is too fast for these small cars.  However a dozen brave drivers still rose to the challenge, with Per Skårner’s Fiat Abarth 1000TC taking victory in the first race ahead of the Cooper S of Sissela Lidebjer and Håkan Huggare’s Saab 96.  The second race looked much the same, but unfortunately Lidebjer retired on lap 6, leaving Huggare to finish behind Skårner and Lennart Nilsson, also in a Saab 96. 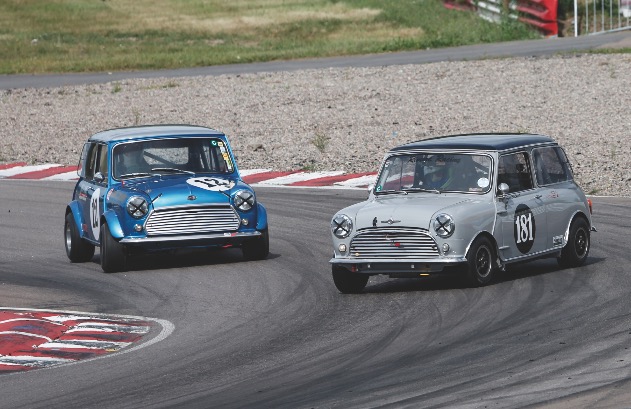 RHK has chosen to try a new race division this year with the smaller cars from the 1966-71 class driving together with the standard pre-‘66 cars.  Hans Beckert started this from pole in his old Mini ahead of Kjell Wallin in a newer Mini.  These two Mini experts had a great duel, from which Beckert emerged victorious by half a second, the two leaders distancing the rest of the pack.

The pre-‘66 GT races also offered some good dices, with Bengt-Åke Bengtsson (Lotus Elan S2) coming out on top from a battle with Tommy Bencsik’s similar car and the Austin Healey 3000 of Anders Schildt.

The newest grid, with cars from 1972-1990 offered a large starting field.  Lennart Bohlin outclassed the others with his monster Corvette while Claes Andersson just managed to squeeze his Opel Kadett GT/E ahead of Rolf “The Mosquito” Nilsson’s Ford Escort RS 1600.

Only two weeks later, more than a hundred Swedish historic racers were out again at Kinnekulle Ring, for an event postponed from May.  On Saturday, everyone got to run a practice and a qualifier in very difficult weather conditions, with first rain, then sun, then sun and rain and even thunder.

The Formula Vee fielded 19 cars, with Johan Lund, Richard “Tiny” Persson and Lars-Gunnar “Vegas” Johansson resuming their battle of two weeks earlier, finishing the first race in that order.  Lund also led the second race and took out a gap to the rest of the field, but when it was time to lap the back markers, he lost out to “Tiny” who went on to win the race.

In the Formula Ford heat, it was the twin carburettor Formula Vee of Johan Lund on rain tyres that had the advantage in the wet qualifying, but the race was dry, handing the advantage back to the Fords.  “The plan is to take Lund before the second curve, before he has time to get the heat into his slicks,” said Håkan Tagesson before the race.  However, the tactic failed, though Lund eventually had to let Henry Sandblom past.

In Formula Slicks, we saw no slicks in the wet qualifier.  Rain specialist Sonny Johansson took his Reynard 883 to pole, with pre-race favourite Torgny Johansson’s March F2 only fourth on the grid.  In the dry race Torgny was quickly up to second, but there he remained behind Sonny lap after lap.  Maybe he lulled the Reynard driver into a false sense of security, but suddenly Torgny was past and stretching out a gap.

In the Sports 2000 class, Henrik Hansson took a double victory in his Tiga. 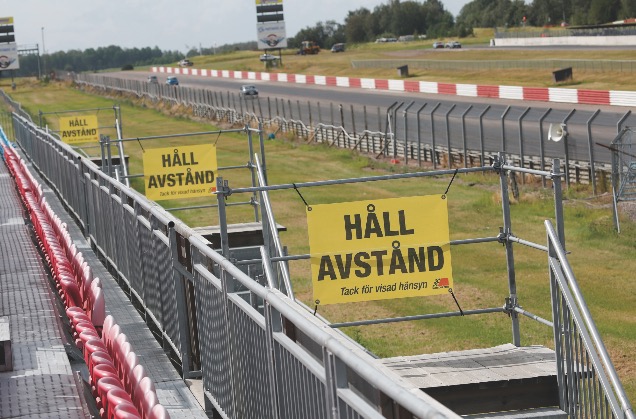 The 1000cc Cup has always provided a reliably large field, but at Kinnekulle they were only 14 cars.  It was really SAAB weather in the qualifiers, which suited Per Ola Persson well when he took his first ever pole position.  He thought about how to use it to his advantage in a dry race, but failed, as Per Skårner took his Abarth into the lead at the start.  Persson, however, hung in well and was less than a second behind at the finish.

Standard pre-‘66 cars over 1000cc was the smallest grid of the weekend with only six entrants.  Newcomer Kevin Bengtsson took the lead in his Mini Cooper S, but lost it to Per Skårner’s similar car  after a violent spin under the bridge.  Skårner thanked him for the invitation, but had to stop with a puncture.  Veteran Hans Eklund (Saab Sonnett) stepped forward and won ahead of a recovered Bengtsson.

In the GT class it was not surprising that the old rally fox Claes Andersson (Austin Healey 3000) would take pole in the wet qualifier, but in the race it got a bit tougher.  Rolf “The Mosquito” Nilsson, made a comeback to the class, helping Tommy Bencsik sort out his new Lotus Elan.