British Pair Nick Sleep and Alex Montgomery won the Plateau 5 event in their Lola T70 at the Le Mans Classic, but it took a turn of events worthy of the Michel Vaillant comic book ‘le Fantome des 24 Heures’. Sleep in an Elan broke down at the Mulsanne chicane furthest from the pits on the last lap of the preceding heat.  Explaining his urgent need to get back for the start of the next race, he was eventually offered a lift by a mystery ‘sportif’ on the back of his motorcycle.  They set off at a pace, off-roading through the dense woods that surround then track. With only the rider to cling onto, he witnessed the speedo hitting 130kmh as they flashed through the local villages,  waved through by all officials en route, until he was finally deposited by the paddock.  Montgomery meanwhile had already started the race in the Lola but seeing yellow flags, he made a snap decision to take an advantage and pit early for the driver change.   At this point Sleep arrived breathless in pit-lane only to be strapped straight back in and get away with just a 15 second delay, by chance about the same margin by which they would finally win the combined results of all three races across the weekend. Who was that guy? 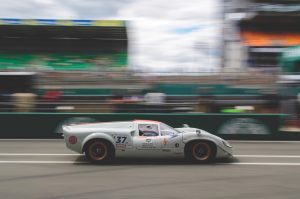