Peter Collins reports on the long awaited return of the Classic..

Four years since the last time, including a nearly-moment in 2020, Peter Auto’s Classic Le Mans, now legendary in its own right, exploded into action with over 600 cars entered in a plethora of races to compete on the hallowed, mostly public roads, of La Sarthe.

Back in the sixteenth century Christopher Marlowe must have been prescient, when in Dr Faustus he writes, ‘Why, this is hell, nor am I out of it….the stars move still, time runs, the clock will strike, the devil come….’  There is much to Le Mans that is unique, but time is almost bent during this event. 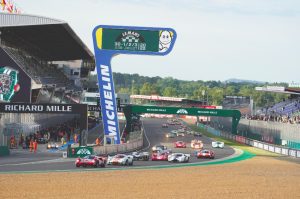 Plateau Five had some of the best racing of the weekend. Here Lola T70s of Giauque and Montgomery lead the pack Photos Hugues Laroche

It is a sort of hell standing in the urban canyon formed by the pits and the grandstands opposite them during the small, very small, hours of the early morning.  The clock may tick, but time seems to stand still.  The commentator, not surprisingly by this time, utters only brief information rather like the mournful horn of a ship in the fog, whilst those spectators brave enough to be sticking it out cluster in the towering stands in the semi-gloom.  Any red car screaming past or in the pits is like a mechanical version of the child in the film ‘Don’t Look Now’.  In utter contrast, Le Mans is also a not very wide, incredibly fast stretch of rural public road through the trees to Indianapolis Corner. When the midday sun beats down and the fastest cars appear round the slight kink from Mulsanne, the road seems to be narrower than ever, especially when a battle is taking place and two cars are side by side. 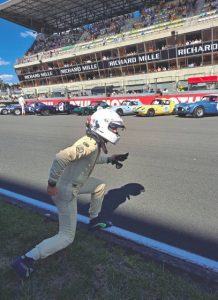 The main event is divided into six plateaux or classes, run continuously for 24 hours and this arrangement allows for a huge entry, as each group totals at least sixty cars.  Each Plateau covers a time period with one representing the pre-war period, two covers post-war until 1954,  with three to six  following on.  In the past the plateaux have been run off in numerical order but, because each 24 hours consists of a day and night and each plateau takes around 90 minutes to complete, it meant that the later categories rarely ran in daylight, so this time they were all run off in the order four, five, six, one, two, three. 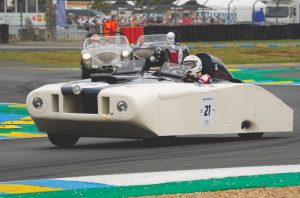 For this edition of the event, four extra standalone support races were run, for Group C (won by Jon Minshaw and Phil Keen in a Jaguar XJR9), Jaguars (winner, Low Drag E-type of Mike and Matthew Wrigley), Classic Porsches (won by Massimo and Marco Guerra in their 935) and Endurance Racing Legends, the latter an increasingly popular category that covers long-distance sports racing cars from the period 1990 to 2005, won by the Bentley Speed Eight of Shaun Lynn. 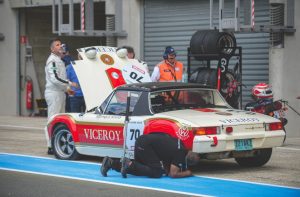 At 16.35 on Saturday Le Mans Classic Plateau Four started the rest of the weekend’s racing with GT40s dominating.  The Cobra Daytona Coupe of Lecourt and Narac, the interloper amongst the Ford-powered leaders, took third.  Diogo Ferrao went on to lead all home in the second and third races, taking the combined overall win. 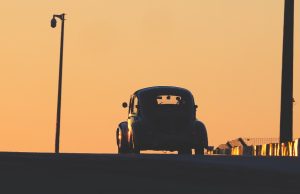 1952 Renault 4CV races into the twilight

Perhaps the most intense battles took place at the top end of Plateau Five with a mixture of Chevrons including the B19 of Henry Fletcher, the Lola T70s of David and Oliver Hart and Nick Sleep and Alex Montgomery plus the Ferrari 312P of Remo Lips and David Franklin. After adjustment of the provisional results Franklin and Lips brought the Ferrari home first in the third race to give the car a win at La Sarthe for the first time, having debuted at the circuit back in 1969. The combined win went to Sleep and Montgomery who also took the Index prize. 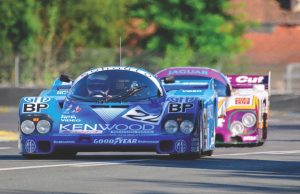 Plateau Six for the most recent cars was a Patrice Lafargue benefit for the first two rounds, as he took his Lola T298 to victory.  The applecart was upset in the third race when Chris MacAllister took a solid win in his Mirage M6. Two second places for  Ludovic Caron in his Chevron B31 were enough to give him the win on combined times, with Beat Eggiman and the Cheetah G601 second. 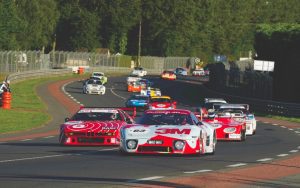 As dusk was falling the Plateau One cars came out for their first race, which was dominated by Gareth Burnett and Michael Birch in their familiar Talbot 105.  Second, three times running, was the Alfa Romeo Monza of Martin Halusa and Alex Ames.  The Talbot won again second time around and was expected to continue that way in the third race, but mechanical problems intervened and so that was won by the Duncan Pittaway and Tim Dutton Bugatti in a T35B which, after the clocks had been checked, took the combined win with Halusa and Ames second. 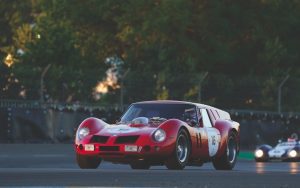 In Plateau Two, remarkably, that latter pairing qualified their Jaguar D-type no fewer than 20 seconds faster than second on the grid, the Healey 100 LM of the De La Rochas.  This was also a surprise, considering the sort of opposition they faced. The D-type ran out the winner in all three races, taking overall combined victory.  A surprise was the Trabers, pedalling their Fiat 8V quickly to fifth overall in one of the rounds. 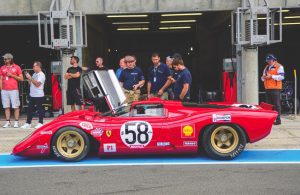 It remained for Plateau Three to be the 18th and last race of the 2022 Le Mans Classic.  The first two rounds were headed by son and father Olly and Grahame Bryant’s Lotus 15, but in race three the Tojeiro Jag of James Cottingham and Max Girardo took top podium, relegating the Bryants to second place and the D-type of Joe Macari and Adrian Newey to third.  The latter had been second in the first round with third place taken by the Breadvan 250 GT Ferrari of Martin Halusa and Alex Ames, but the latter only completed four laps before retirement in the third round after a bad crash at the first Mulsanne chicane.