At the Australian Grand Prix Johnny Herbert returned to Formula 1, albeit driving a Williams FW07/04 in the Shannons Historic Demonstration.  Now owned by Paul Faulkner, the Williams was listed as Jones’ world championship winning car.  Duncan Mackellar follows in his Porsche 962C then Russ Kempnich’s Porsche 956 and Wayne Seabrook’s Renmax BM3.  Fifty-seven historic cars took to the track on three of the four days of the meeting. 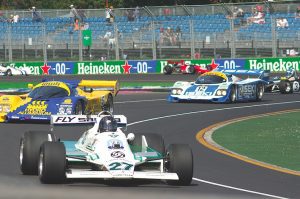