The second event on the Historic Sports Car Club’s 2022 calendar was a race meeting on the 300 circuit at Snetterton in East Anglia on 23-24 April.  Paul Lawrence was there…

Bright but cold conditions greeted around 200 competitors who made the trip east and it was an event with a strong Formula Ford flavour as six of the weekend’s races were for the single seaters.  Topping the bill were the first two rounds of the Historic Formula Ford championship for the pre-1972 cars and both ended in typical slipstreaming thrillers on the fast and open former airfield circuit. 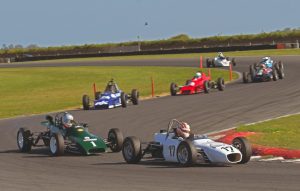 Tom McArthur leads out the Historic Formulas Fords. He won both races, each time by the narrowest of margins. Photo Eric Sawyer

Ultimately, Tom McArthur won twice, but in both races he crossed the line virtually side-by-side with his rival.  In race one that was his friend and rival Callum Grant and in race two it was young Samuel Harrison in the Speedsport entered Merlyn Mk20.  The first finish was very close with just 63 thousandths of a second between them but that was reduced even further in the second race as McArthur towed up alongside Harrison on the run to the line and nosed head by just 41 thousandths of a second. For ore on this and other events, see our June 2022 issue….