Fifty-one years after Australian Vern Schuppan – the future Formula 1 racer and Porsche Le Mans winner – won the inaugural British Formula Atlantic race at Brands Hatch in a Palliser chassis, a Historic iteration brought a new flavour to the HSCC’s season-opener on the venue’s Indy circuit on the weekend of 2-3 April.  Marcus Pye reports… 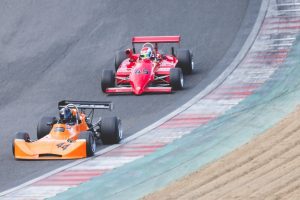 The event’s best racing came in the colourful ‘70s Road Sports double-header.  Top qualifier Charles Barter retired his Datsun 240Z from the opening leg with a duff spark plug, but fought back to win the sequel, in a race stopped twice by another former champion, Kevin Kivlochan.  ‘KeKi’ beached his Morgan +8 in the gravel at Druids on lap one, then restarted and blew its Rover V8 engine mightily, sending several cars spinning like tops into Surtees.  Barter regrouped and aced the deciding sprint after the re-start from the Lotuses of triple champ Jeremy Clark (Elan S4) and Paul Tooms (Europa).  Kivlochan bounced back to win Sunday’s Historic Road Sports race in his AC Cobra, with Frazer Gibney (Elan) in tow over the finish line.