A week after the Oulton Park Gold Cup, which this year featured a mixture of races from different organisers, the Historic Sports Car Club returned to the Cheshire circuit to give its core club drivers the opportunity to race on the International circuit for a one-day meeting on 6 August.  Summer holidays and competing events resulted in thin grids amongst the HSCC rank and file, who nonetheless spent an enjoyable day. 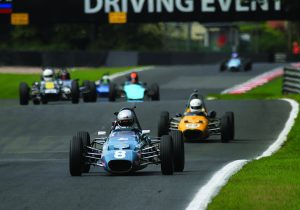 Continuing his rise to prominence, young Samuel Harrison took two consummate wins in the Historic Formula Ford races, adding his name to the Paul Simms Memorial Trophy, presented by Paul’s son Benn.  In the first race a lap one incident when Scott Rawlinson had a brake pad pop out leaving him stranded, luckily without too much damage to his Merlyn, resulted in a red flag with a full 20-minute restart for everyone else.

Harrison was first off the line from Ted Pearson and Chris Porritt, gradually increasing his lead to a comfortable gap, which was fortuitous, as a split rim on the rear wheel of his Merlyn resulted in a puncture towards the end of the race forcing him to nurse the car home to win by just 1.5s ahead of Pearson.  The fight for third was more intense, with Rob Smith, Porritt, Ross Drybrough and Paul Unsworth all engaged in the battle, to finish in that order. 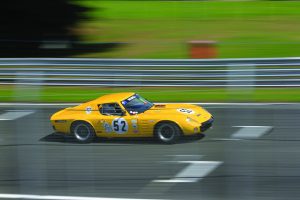 Harrison drove a conservative race 2 to win by just over 12s.  The focus this time was on the progress of Scott Rawlinson who, with his Merlyn repaired, started from the back.  Getting into his stride, he set fastest lap and mixed it with the train of cars fighting for second place.  With Pearson carrying a ten-second penalty for a jumped start, Porritt and Rob Smith shared the podium, with Rawlinson coming home in fourth place.