The European Formula 2 Championship took its final curtain call at Brands Hatch in 1984 before being replaced by F3000, thus merits the HSCC’s retrospective, run for two-litre cars to 1978 and 1600cc predecessors from ‘67-’71.  The spectacular cars always deliver on the Grand Prix circuit, indeed the annual Legends Superprix’s double-header could not have been more hotly fought.  Invitee Martin Stretton – the 2007 and ’09 champion, running his March 712 with a two-litre Ford BDG engine narrowly prevailed each day, shading 782 drivers Matthew Watts (BMW M Power) and Matt Wrigley (Hart power). 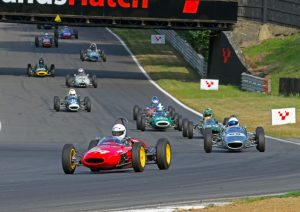 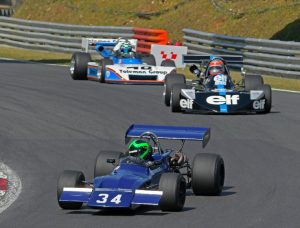 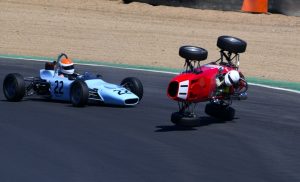 Teenager Samuel Harrison won the Historic Formula Ford and Historic F3 races in Chevron B15 and Merlyn Mk20 respectively and looks an odds-on bet to snare both crowns.  The second Formula Ford race was started by Grahame White,  who first dropped the Union flag on the category’s debut race here in July 1967.  That was won by Ray Allen in a Lotus 51 and his original trophy would be presented to the latest winner. This one ended abruptly when 2009 champion Westie Mitchell cartwheeled into the gravel at Paddock having been tripped by period racer Tim Brise, who had out-braked Rob Smith in the trio’s all-Merlyn battle for fifth overall.  After an anxious few seconds Westie crawled from his inverted car unaided. 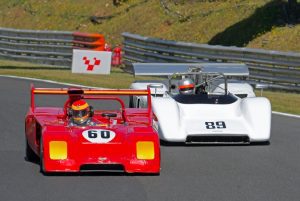 Classic F3 champ Andy Smith (March 783) annihilated his opposition in a heartening field, beating former winner Simon Jackson (Chevron B43) by 40 seconds in the opener. Following engine failure in his Lola T400 at Donington, Michael Lyons brought out the family’s Eagle FA74 and outclassed the Aurora Trophy pack which boasted six F5000s.  Stretton (in his F2 March) and the Chevrolet-powered Chevrons of Neil Glover (B37) and Paul Campfield (B24) which came closest.  A late safety car covering the marshals extinguishing veteran Richard Piper’s Brahma on the GP loop, punctuated the Guards Trophy finale, with James Dodd’s Ginetta-BMW G16 in front. 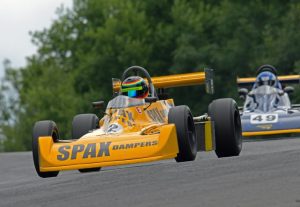