Silverstone was American Eddie Cheever’s happiest hunting ground before his 1996 Indianapolis 500 victory.  In 1975, at 17, he won two British Formula 3 races there in six days driving a Modus, then in ‘79 he aced the International Trophy – a European F2 championship round – in the factory Osella-BMW on Pirelli wets.  He also won Silverstone’s World Sports Car Championship rounds in ‘86, ‘87 and ‘88, sharing Silk Cut Jaguars with Derek Warwick, Raul Boesel and Martin Brundle respectively. 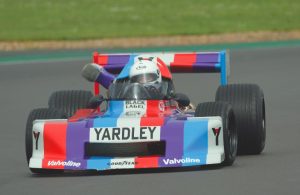 Silverstone did not host F2 in ‘78, when Cheever saddled March-BMW 782-14 for Ron Dennis’ Project Four Racing, but eight of 12 round wins for Bruno Giacomelli in the works Polifac BMW Junior Team 782 left slim pickings for breathless rivals.  Seconds at Rouen in France and Enna-Pergusa in Sicily – also super-fast tracks – headlined Eddie’s campaign in which he finished fourth, falling from second in ‘77.

Owned by Richard Evans and pedalled by the gifted Andy Smith, Cheever’s March 782 triumphed on its historic racing debut at Silverstone in the second leg of the Aurora Trophy feature at the HSCC’s International Trophy retrospective on May 14-15.  After a brief shakedown, Smith bagged pole but retired from Saturday’s opening race with no rear brakes and a loose front wishbone, having disputed the lead with winner Rob Wainwright (ex-Alex Ribeiro March-BMW 762). 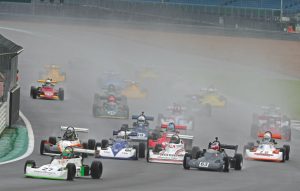 European sportscar star of the 1970s John Burton refuses to slow down. The octogenarian (!) won both Thundersports races – the second on a damp track that increasingly favoured his slick tyres – from James Schryver in a similar Chevron B26 and Jamie Thwaites, whose Chevron B19 was best of three Team Gunston cars redolent of South Africa’s Springbok Series.

Scoring a Classic Formula Ford double at one event in different cars is unprecedented.  First race winner Cam Jackson did that after his Winkelmann (US-market Palliser) WDF2 was damaged after a flight over Michael Richings’ Alexis at Club while a close third behind Tom McArthur (Titan Mk4) and Ben Mitchell (Merlyn Mk20) in Saturday’s superlative Historic FF1600 race, an old-fashioned Silverstone slipstreamer.