The normally popular HSCC Donington weekend on 18-19 June offered 22 races over two days and if the grids were not as full as some previous years, then they were still holding up well.  With a largely wet Saturday and dry Sunday, those with a race on each day could test their driving in both conditions.

For four laps one time Euro Series champion Adrian Reynard led the Historic FF2000 race driving one of his very own cars and looking very impressive, but it was regulars Ben Simms and Graham Fennymore who eventually took victory in both races in that order. 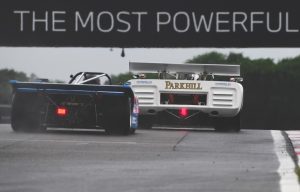 In Thundersports the wet race one winner was show-garden designer Mark Richardson in the pretty Gitanes/Filipinetti liveried Lola T290.  He patiently stalked the beefy McLaren Can-Am M8E of Warren Briggs, which was struggling for grip, before slipping past into an ever-increasing lead to the finish.  On Sunday unfortunately for Briggs he retired after a few laps and so it was Simon Watts in the Gunston Chevron B26 who then crafted a fine win ahead of Gary Furst’s Lola T212.

A highlight of Saturday was the dice in the Aurora Trophy between the fleet Formula Atlantic Modus of Ben Tilley and the F5000 T400 Lola Chevy of Michael Lyons.again. 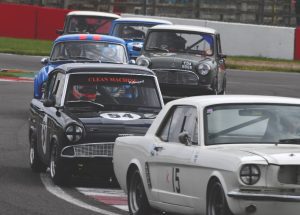 23 cars started the Historic F3 races. In an impressive drive young Samuel Harrison in his Chevron B15 won both easily. Historic Formula Ford 1600 produced a predictable number of collisions, track departures, penalties and parc fermé exclusions.  From all the controversy and confusion Harrison, this time in a Merlyn, won again in the wet and Callum Grant was finally declared winner and set fastest lap in the dry.  Classic Formula Ford saw Richard Tarling in a Crosslé win on Saturday, after a great overtaking manoeuvre into Redgate corner.   On Sunday it was Rick Morris’ turn in his Royale, by less than 0.2 of a second, after Tarling had a collision and the leading car of Tom McArthur was penalised for exceeding track limits.

Both HSCC Historic Touring Car grids missed the wet weather. While Neil Wood in his Ford Anglia only qualified fourth, he made it a double victory forging ahead of Mark Watts’ Mustang both times.  David Ogden and Nick Paddy followed and took the class made up of many Minis. 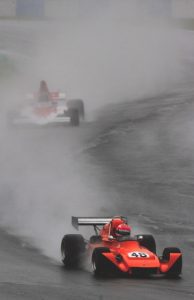 Of the single races, the longest was the Guards Trophy at 23 laps, but with only 22 starters, it was series newcomer Steve Nuthall who dealt with conditions best.

HSCC Historic Road Sports saw no fewer than six Morgan +8s on the grid, the first four only covered by a second.  Kevin Kivlochan emerged quickest in the end.  In HSCC 70’s Road Sports it was equally close at the top between TVR, Lotus and Porsche. Julian Barter in his 3000M won ahead of Jim Dean’s Europa.