Last run in 2019, pre-COVID, the Croft Nostalgia event brought the Historic Sports Car Club’s brand of racing back to the north east of England to a rousing reception on September 3-4. A good spectator turnout, many of whom arrived in a vast spectrum of classic cars – including an immaculate MG TA bought by its owner from a scrapyard for four pounds and 10 shillings in 1968 – witnessed some fine racing on one of the country’s most pleasant circuits.

Over a weekend of two distinct halves – Saturday treacheously wet; Sunday largely dry and sunny – punters saw local lad Samuel Harrison win all four races he contested and the Historic Formula Ford championship on his debut at the venue. And perennial hard-trying privateer Benn Simms added an eighth HSCC crown to his CV after a drama-laced Historic FF2000 double-header that went to the wire against defending champion Graham Fennymore. 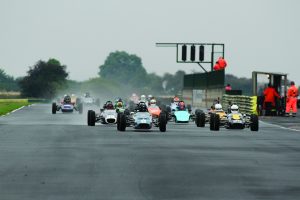 Eighteen-year-old Harrison, who started car racing in 2020, extended his remarkable run of success to 15 victories this season. He trounced his FF1600 opposition in a Mike O’Brien Classic Team Merlyn Mk20, finishing ahead of Oliver Chapman (Lola T200) and Cormac Flanagan (Alexis Mk14) on Saturday and, double champion Callum Grant – a late entrant, who came from the back in his Merlyn – and Rob Smith in a sister car in race two on Sunday. Graham Fennymore beat points leader and fellow Reynard driver Benn Simms to pole for the FF2000 opener by 0.048s, but with his rival ahead, spun on the opening lap covering a lunge from Drew Cameron (Royale RP27) in the waterlogged Complex. Fennymore was leading Simms in Sunday’s sequel when it was stopped for the recovery of a crippled car in a dangerous place. Benn seized the initiative at the restart and took the chequer after six laps, only to be bumped to fifth by a 10 second penalty for jumping the start, a decision which Fennymore questioned. Cameron and Lee Bankhurst (RP30) split them in the re-classification. Only the following day, when sages had consulted their abacuses, did Simms realise that his score was beyond reach. “This one’s for Dad,” said Benn, whose great mentor was an early COVID victim. 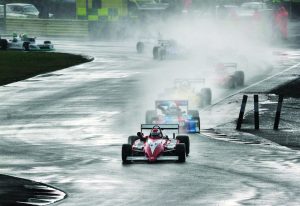 Callum Grant won Sunday’s sensational Classic FF opener after miraculously avoiding leader Tom McArthur (Hawke DL2), who had spun in front of him and been collected by Jordan Harrison (Lola T540E) running just behind them in the breakaway.

The Guards Trophy mini-enduro for Pre-‘70 sports racers and Pre-‘66 GT cars resulted in a maiden victory for Simon Jackson (Lenham-Ford twin-cam), who saw off Steve Nuttall whose Chevron-BMW B8 lost its nose following a scrape at Tower corner. 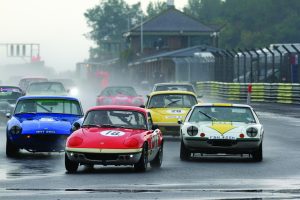