The Historic Racing Drivers Club took over the lesser-known Kent circuit on 3 July to run double races for the Jack Sears Trophy, Dunlop Allstars and their ever-growing Alfa Challenge. In the latter category, George Osbourne in the ex-Peter Hilliard GRP2 Alfetta GTV normally driven by Chris Snowden, came out on top after close battles with Ben Colburn in a Giulia Sprint GT. Both Jack Sears and Dunlop Allstars races were ruled by Pete Chambers’ Cortina, despite the close attention of Nathan Heathcote’s Mini which, well suited to the short up and down hill track, at least won the first heat. 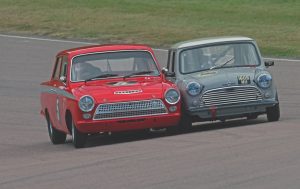