The HRDC’s inaugural Gerry Marshall Trophy for Group 1.5 Touring Cars, the first by that name outside of Goodwood, took place at Snetterton on 19 June with a 45-minute single pit stop race. An impressive 29 car grid started with 19 different makes or models represented in a field of genuine diversity. BTCC and McLaren test driver Mat Jackson edged his front wheel drive VW Scirocco onto pole ahead of Robert Oldershaw’s big Rover and the awesome family Mustang of Bill and Fred Shepherd. Come the race and the VW initially dropped back to eighth, but after the driver change Jackson made a storming drive to get back up to a podium place. Meantime in front it was the Rover that won the battle of the V8s, when despite setting fastest lap of the race, a slower pitstop kept the Mustang out of final contention. The inclusion of a class structure, unlike at Goodwood, ensured there was something significant for drivers to fight for throughout the field. HRDC are now planning another race later in the season alongside their already busy grids in the Classic Alfa Challenge, Dunlop Allstars and Jack Sears Trophy. Details at www.hrdc.uk. 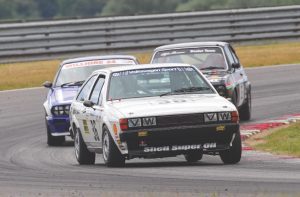