The French Historic Tour resumed in the Auvergne at the undulating circuit of Charade on 20-22 September after a long summer break with 300 entries competing in 20 races.  Clement weather on Saturday gave way to rain on Sunday afternoon, as the pilots wrangled for the two French Championship titles. 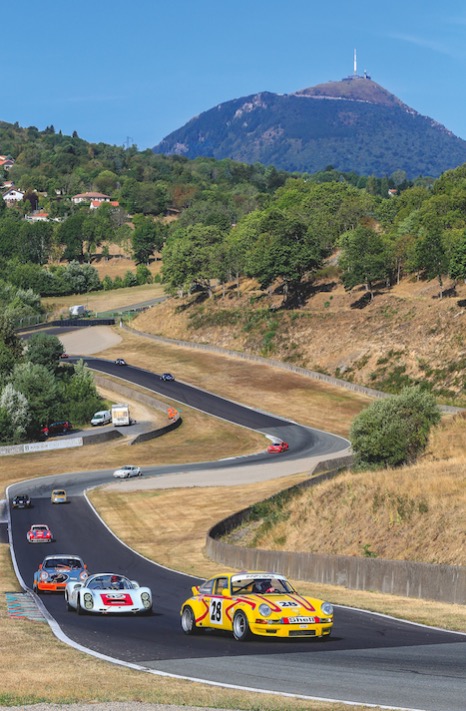 With Formula Ford forming the biggest grid of the meeting, 37 starters were headed by reigning F Ford Champion François Belle in his Lola T540E, ahead of Alain Girardet.  These two distanced the rest of the pack, led by Alexandre Fournier and guest driver, Frédéric Rouvier, getting into his stride and moving firmly into third place. Half way down the pack, Brit Alan Crocker took Class A. The second race was a re-run of the first,  Belle, taking it by 7/10ths of a second.  Crocker took his second Class A win, ahead of Lombardi and Didier Mantz.

This time it was the turn of Alain Girardet to try a new formula, the Swiss taking a Ralt RT3 to third place in qualifying behind regulars Rouvier and Davide Leone in his March 783.  A long safety car period two laps in, after Gianluigi Candiani went off, saw the trio circulating in that order, with only three laps left to run once the safety car retired.  The sprint to the chequer saw Rouvier finish by a 7/10ths margin to Leone and Girardet, with Eric Martin (Martini MK39) and Ian Jacobs (Ralt RT3) completing the top five.

In the F Renault division, Tony Boudreault was the winner when Fabrice Porte, who had started from the back of the grid after his engine blew in qualifying, flew to the front in the few available laps, only to break again within sight of the flag. 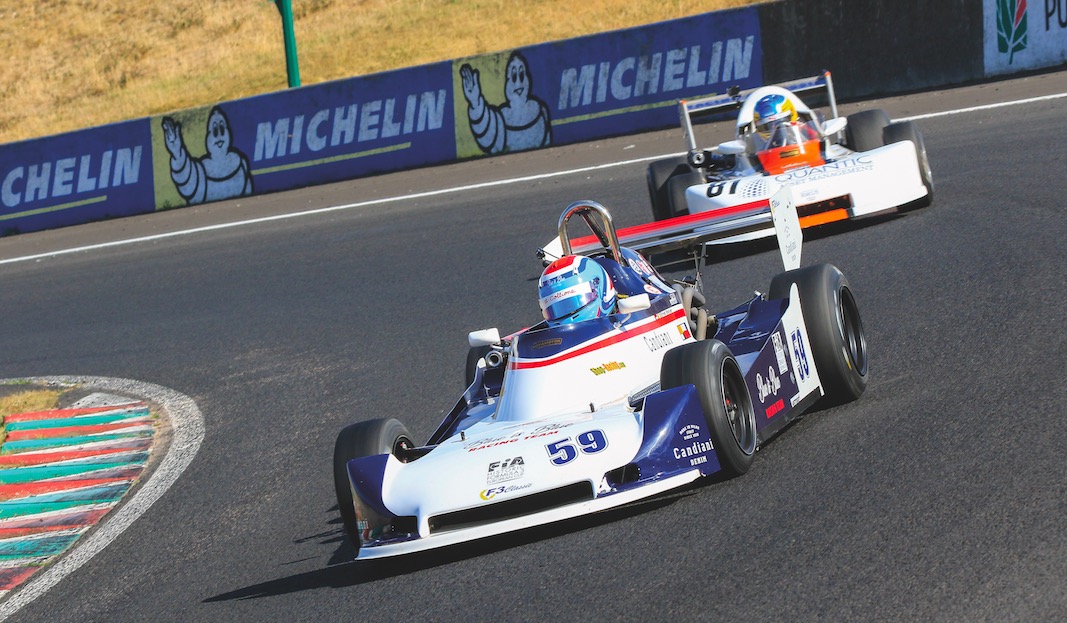 Sunday’s re-match saw heated battles for the top places, with Rouvier and Leone wheel to wheel for the first half and Girardet and Martin equally fighting for the remaining podium place.  Sadly, Leone left the scene and once again the safety car was deployed.  When it was gone, Rouvier was at his ease to take the win ahead of an on-form Martin, and  Davide’s father Valerio Leone.  Boudreault once again topped the Formula Renault contest.

Starting from pole at the wheel of the new family Debora SP91, Matthieu Châteaux only completed one lap in command before being stopped by a minor ignition problem.  Once his car was recovered the race was relaunched with Frédéric Rouvier, driving a Lucchini as the new leader.  Well-practised (this was his third race of the day) the French champion retained his advantage until the end of the eleven laps, holding at bay the Lucchini of the other Châteaux son, Jean Baptiste.  After seeing off Dominique Vulliez, Louis Kolly brought his ex-Larrousse Lola T292 home in third place, also winning his class. Glenn Duddley (Lola T87/90) and Pierre Groppi (Lola T86/90) were other class winners. 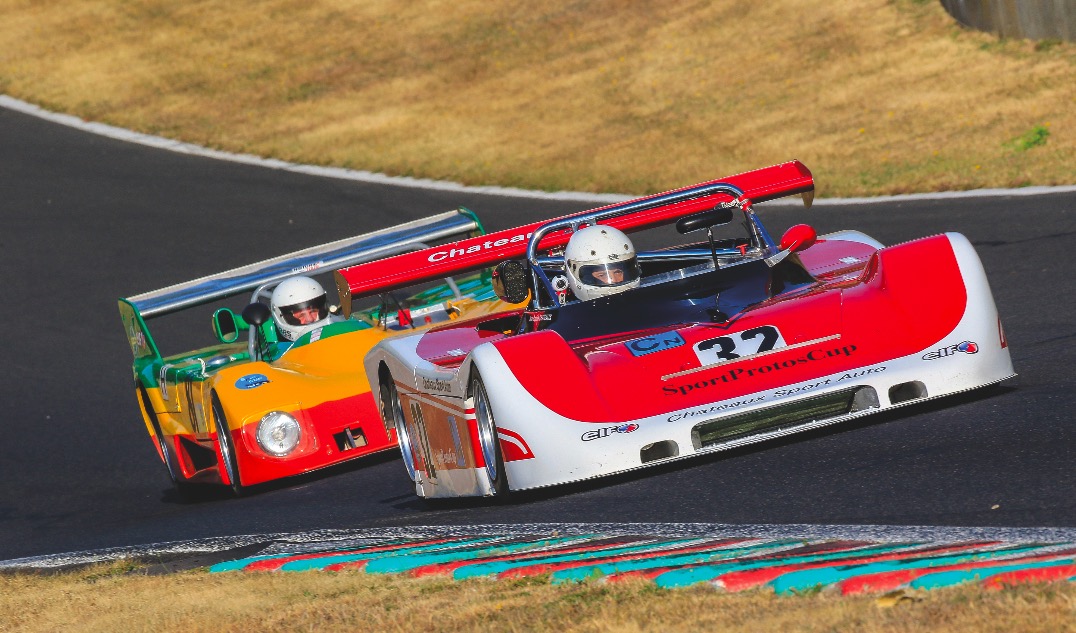 Starting from pole at the wheel of the new family Debora SP91, Matthieu Châteaux only completed one lap of the SportProtosCup race before he was stopped by a minor ignition problem.

Sunday afternoon’s race was started in the rain behind the safety car, with Rouvier again escaping once it withdrew.  He was chased by Jean-Baptiste Châteaux and Josserand De Murard (Merlin MP46), thriving in the delicate conditions.  As conditions developed, newcomer Patrick Ferrier became fastest on the track at the wheel of his Chevron B61 and nibbled away at the others to join Rouvier and Châteaux on the podium.

Two Asavé Racing 65 encounters were dominated by the TVR Griffiths of José Beltramelli and points leader Didier Gruau, the pair never more than a second apart, leaving the rest of the field in the distance until the two spun simultaneously. Gruau emerged from the mishap with an advantage that he kept to the flag.  Behind these leaders, an eventful Lotus Elan race ended with Jean-Pierre Vacher, taking third after Franck Julien retired with a broken brake calliper.

The retirement of Beltramelli in the first lap of the second race deprived the spectators of a good scrap- between the two TVRs and left Gruau to win as he pleased ahead of the Elans of Vacher, and Julien, who came back up through the grid after his retirement on the previous day.

The Honda Civics of teammates Franck Quagliozzi and Fabien Julia lined up on the first row of the grid shared by The Youngtimers and Roadster Pro Cup.  Dry or wet  no difference to Quagliozzi, who finished won both races, the second, wet, race by nearly 30 seconds ahead of Jean Christophe Bastia in his Renault 5 GT.

The second race saw a similar scenario, with the two GT2 cars well out in front, with Romac the strongman of the pair and Mathieu’s BMW leading the rest.  Guy Rougemont (BMW Z3) and Pascale Roche (Porsche 928S) were also class winners.  Deprived of his Audi opposition, Grenet again took Saloon Car honours.

Poleman in his Cooper S, Laurent Majou Rosinoer profited from the bad start of his front row neighbour Jean-Pierre Destombes (CG Spider), who was quickly back in second place ahead of the Coopers of Jonathan Hartop and Samuel Notebaert, between whom Christophe Beaudon eventually interposed his Austin Healey Sprite.  Pierre Maingourd (Ginetta) took the 1000cc class. 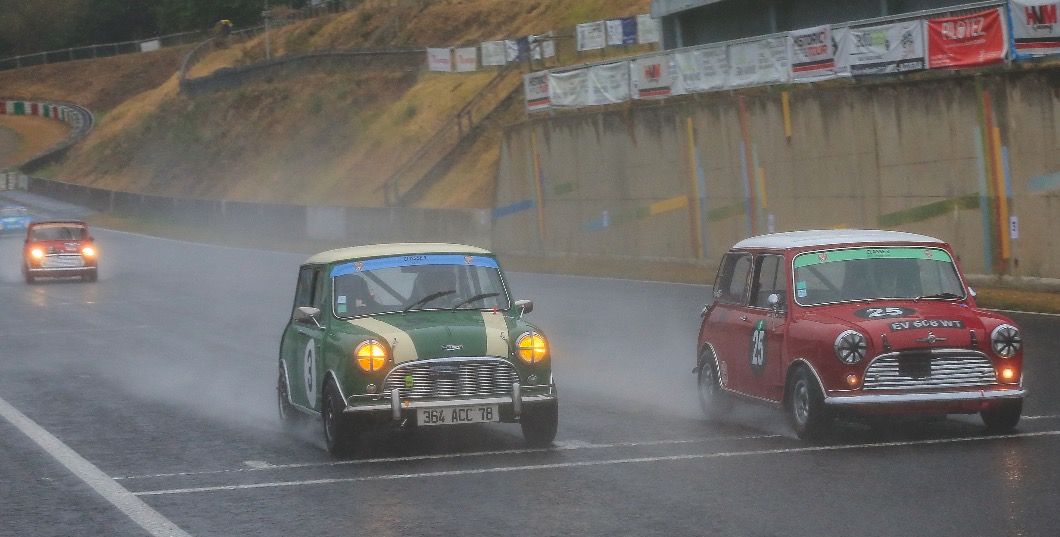 Minis singing in the rain

Majou Rosinoer also took the lead in the wet race on Sunday, followed by Hartop and Notebaert.  Starting a little fast from the front row, Destombes immediately got a Drive Through penalty, but spun off before he could perform it.

Leader of the Trophée Lotus Xavier Jacquet once again proved to be unbeatable in two races, andlLeader of the French Championship for single seaters, Arnaud Dousse added to his points tally with a dry and a wet win in two Formula Ford Kent contests.