The seven-round Irish Championship series was decided on 19-20 August with the double-points Ulster Rally.  With four of the leading contenders still in the running, Neil Williams and Anthony O’Sullivan started at the top of the leaderboard in their RS 1800-spec Ford Escort after a perfect performance on the Cork 20 in July, their third top-score of the season.  Luke McCarthy and Brian Duggan, just three points shy of the leaders, were set to take on the Ulster, but unfortunately, McCarthy had to withdraw due to a back injury.  British crew Duncan Williams and Guy Weaver, also in an 1800 Ford Escort, were the next challengers, but after they had set fastest time on the opening stage of day two, they retired with clutch failure, paving the way for Neil Williams and Anthony O’Sullivan to secure the Historic Irish Tarmac Rally Championship title for 2022. 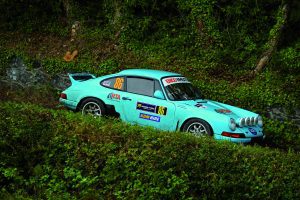 Trevor Wilson and Paul Mulholland debuted a Porsche 911 on their home Newry stages to finish second, almost a minute and a half behind Williams’ pace over the nine-stage event. Photos William Neill