After races at Barcelona, Pau and Spa, Historic Endurance Racing held its first race on Portuguese soil this season at the Autódromo Internacional do Algarve on 30-31 July. The meeting was held in the heatwave conditions that have affected most of Europe.

After Saturday morning’s qualifying session, 46 cars took to the hot asphalt with poleman, Pedro Bastos Rezende (Porsche 911 3.0 RS), out front.  However, the advantage built in the initial moments was erased in the fourth lap when the safety car was called out to remove a car immobilised in a risky position.  The safety car period proved decisive in the teams’ strategies. 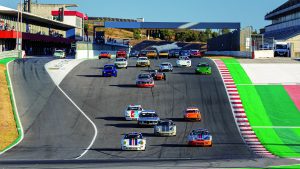 At the restart Rezende looked more than capable of repeating his double Barcelona victory, until, four laps from the end, engine problems left him at the mercy of Spanish driver Eduardo Davila (Porsche 911 3.0 RS), who had remained in a comfortable second place, and Domingo Sousa Coutinho, teamed with Ricardo Pereira in his BMW 2800 CS, who snatched second place from the ailing Porsche, winning the H1971 class in the process ahead of Joaquim Soares (Lotus Elan) and Luís Sousa Ribeiro (BMW 2800 CS) who were next across the line.

With his Porsche out of action, Bastos Rezende had to resort to driving his spectacular De Tomaso Pantera for the second race.  Starting from 43rd place on the grid, on a day when temperatures were not inviting extreme performances, the De Tomaso Pantera frantically climbed through the field to first place.  Without taking unnecessary risks, Rezende didn’t slow down his pace, even after he had overtaken the whole field, and crossed the finish line 44 seconds ahead of  Soares’ Elan, winning the H-1976 class.  Bruno Duarte and Filipe Jesus improved on Saturday’s result and in their Porsche 911 3.0 RS to finish second in the ‘76 class, their best result of the season.

Coutinho and Ricardo Pereira led the H-1971 class for a good part of the race, but a penalty for speeding in the pitlane put an end to their chance of repeating their Race 1 success, making way for the Alfa Romeo 2000 GTAm of the German duo Bjorn Ebsen/Volker Hichert to take second place behind Sousa to repeat their class result from the Spa 3 Hours. 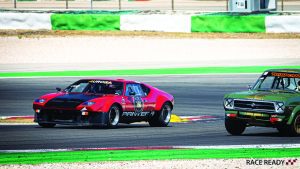 With an impressive 11th place overall, 2009 Spanish GT Champion Ricardo Bravo, driving an Alfa Romeo GTA, triumphed in the Gentlemen Driver Spirit (GDS) category on Saturday, beating the elegant Porsche 911 SWBs of Piero del Maso/João Carvalhosa and Frenchman Michel Mora.  The category that includes all cars equipped with engines up to 1300cc and all Touring cars up to 2000cc had a different winner in Sunday’s race.  Problems with the Alfa Romeo opened the door to Michel Mora, who won ahead of del Maso/Carvalhosa.

In the GTP & Sportscar class, João Mira Gomes/Nuno Afoito (Lotus 7) were winners both times.  Pedro Moriyon/José Carvalhosa won the Index of Performance Cuervo y Sobrinos watch in their Porsche 356 B.