The Historic Dubai Grand Prix Revival powered by Gulf Historic, to give it its full title, will take place on 2-3 December 2021 at the Dubai Autodrome in the context of the 2020 Dubai UAE Universal Exhibition, celebrating 50 years  since the founding of the United Arab Emirates and 40 years after the 1981 Dubai Grand Prix, which was the first motor race held on a circuit in the Persian Gulf.  Promoting the event is GPX Events, a division of the Dubai-based GP Extreme Group, which has amongst its other divisions GPX Historic, a racing team that runs historic F1 and Group C cars.  GPX Events organised the historic F1 support race at the Gulf 12 Hours in Abu Dhabi that took place in 2017 and has ambitions to develop a ‘Gulf Historic’ series of races over time. 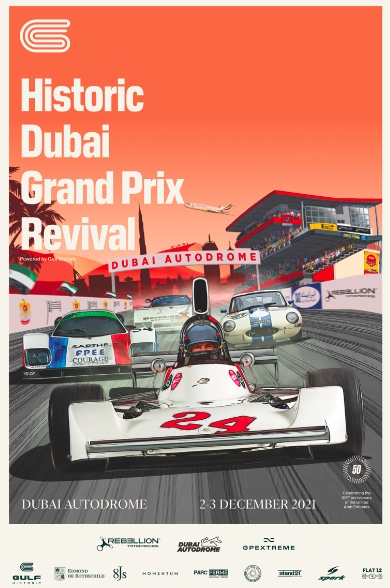 According to press releases, the Dubai Revival will be “Both a festive and sporting event with races for historic Formula 1 cars and Group C prototypes, as well as an exhibition village where visitors can see classic cars and collector objects.”  The F1 race will be for cars from 1970 to 1985 and include two qualifying sessions and a 30-minute + 1 lap race.  The Group C prototypes will have a 45-minute + 1 lap race with a mandatory pit stop, so two drivers can run.  When asked, GPX could not reveal how many cars are involved, but GPX Historic fielded 11 historic F1 cars of different eras at Monaco.  Other track activity will include sessions for the Dubai classic car community.  Contact Eléonore Joulie eleonore@gpextreme.com for further details.