Dick and Harry Baines went into the final day of the 10-day 3500km London Lisbon rally just eight seconds ahead of the Datsun 240Z of Nick Maris and Henry Carr, with the full expectation that the more powerful Datsun would overtake the little Mini, the smallest car on the rally, before the day was out.  The Datsun had been relentless in its pursuit and was gaining ground over the final couple of legs, but just the slightest hesitation at a crossroad by the Datsun crew was enough to clinch the win for the Baines, father and son.  “There was huge pressure today, we had very little margin and they’ve been catching us for two days one way or another.  With not with much power to go up the hills, it’s been difficult’” said young, 26-year-old, Harry, on the podium. 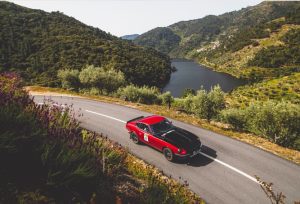 “We have been against some big cars and some expensive cars, and some people that have been at it for a lifetime, so I’m really impressed with it,” said winning navigator Harry Baines

“This little car has been in storage for 21 years.  The last time this car was out was 2001 when it did the Monte Carlo Challenge.  Dad’s navigator at the time was his best friend, who unfortunately passed away just afterwards, so the car has been parked up for 21 years on the farm in the shed.  This has been my fifth rally. We started last year at the Novice Trial, then we did the Summer Trial.  We are also proud that the car is prepared by me and Dad.” 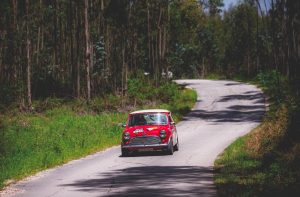 Nick Maris and Henry Carr battled to the end, losing out by the slimmest of margins Photos Will Broadhead Courtesy HERO/ERA

Tony Sutton and Bernard Northmore enjoyed a major battle with Stephen Owens and Pete Johnson in what became the battle of the Porsches as they kept swapping the final podium position.  Tony was in his 911 SC and Stephen in the 911 SWB, but with just two tests left at the Kiro Kartodromo on the final day, there were just three seconds between them.  Sutton and Northmore maintained the exact three-second gap to claim the final spot, while Owens and Johnson won their class in compensation.  Also winning their class were Julia and Steve Robertson, who were an impressive 5th overall in the 1955 TR3, and John Evans and Tristan Judge who won Class 6 in the rare and striking Alfa Romeo 1600 GT Zagato.